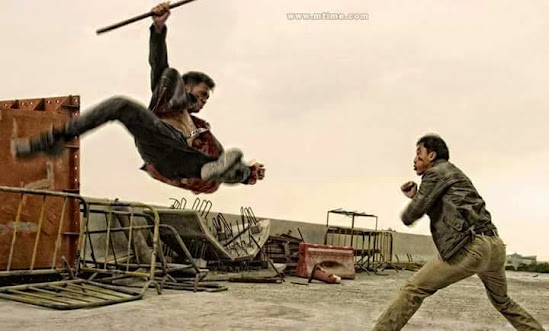 Director Teddy Chen’s Kung Fu Killer is getting a limited theatrical and digital release here in the U.S. starting this Friday. In light of this, I decided to rent action star Donnie Yen‘s 2013 cop thriller, Special ID, one in a thematic trilogy of stylish MMA-formated Hong Kong action movies following the hits he’s had with director Wilson Yip on S.P.L. in 2005, and Flash Point several years later.

Yen‘s role is one that transcends between actors on all three films in line with the familiar plot centric on an undercover cop in danger of being found out by the very criminal outfit he is investigating with every minute he gets closer to ending it. Here, Yen‘s iteration of said character, Chen Zilong, has been under for so long that even his own standing among his police force is dwindling whilst he adheres to his status as ‘big brother’ in triad gang politics; the film starts with him rescuing his three underlings from a rival in a game of Mahjong which ultimately turns into a flurry of fisticuffs with a briefly-appearing Ken Lo and his extras joining in on the brawl, and obviously there’s only one way that fight could go on for this movie to continue, so, moving on.
We eventually meet Jing Tian who partners up Chen as Fang Jing, a by-the-book cop and gifted sharpshooter blatantly designed as an homage to female-centric Hong Kong cop flicks of yesteryear. She’s assigned to help him take down mob boss Xiong, played by Collin Chou, who also assigns Yang to delve into a case of Xiong’s stolen goods with Yang’s ambitious ganglife ‘younger brother’, Sunny, played by Andy On. Amidst all of this, friends are murdered, backs are stabbed, snipers run amuck, and suspicions loom with political triad volatility as Chen’s time runs out, and when it does, it could mean Chen’s life, and that of his mother, the only family he has left.
Clarence Fok directed and wrote this while Yen helped produce on top of starring and directing the action as well, which is a lot of hats to wear. While I won’t get too technical with my review here as its been a while since this film came out with plenty to go around, including guest contributor Graeme Noble’s contribution at the time, I will point out a few things in summation.
Special ID isn’t the best Yen actioner to watch in terms of acting and performance, or even the soundtrack. The jazzy music at the beginning often occurs throughout the film and made me feel like I was watching a parody of a film that wasn’t trying to be. Moreover, Yen‘s carpe diem persona wasn’t too convincing, and neither was Tian whose tough-as-nails badass cop role is almost consistently interfered-with by her dainty size, her sensibilities, and the fact that she drinks out of a Hello Kitty mug, which is quite telling. Granted, she has her moments, so there’s that.
In addition, some of the action threw me off, but I understood the nature of the fights and what they were meant to look like – scrappy, brutal and rugged as any street fight, mostly, and in that aspect, the fights were entertaining. However, I have to say that the PR campaign for that film really ruined it by releasing a clip of the final fight between Yen and On before the film’s Asian release, because this film really didn’t have much to rest on. Otherwise, Special ID is definitely worth the price of renting; Purchase at your own risk, of course.
I also want to add this as well: While the English lines in this film were mostly cringeworthy, the right director and crew may help steer the likes of On on a path toward better films, and there IS a place for him in an American or a UK martial arts film. It just needs to happen already. Been at this since Black Mask 2.
I think a rematch with Scott Adkins is in order. In the meantime, the much more-celebrated Kung Fu Killer arrives this weekend. Get your tickets!