Nicholas Cage's OUTCAST Gets A 2015 Re-Launch 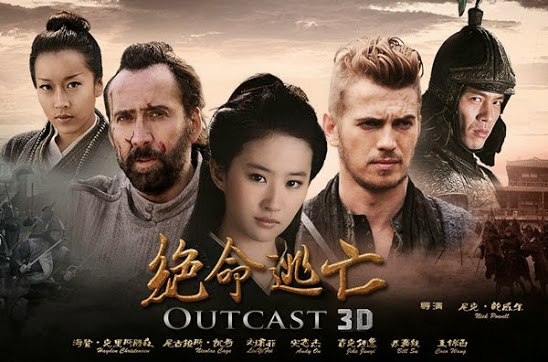 Reasons behind China’s unceremoniously cancelled premiere of debut director Nick Powell‘s period action epic, Outcast are still shrouded in mystery, but now it appears that things are finally getting back on track.

An announcement was held on Monday this week in Los Angeles by La Peikang, chairman of China Film Group, and Zhang Xun, head of China Film Co-Production Corporation, stating the film’s forthcoming releases in China and North America in January and Febuary, respectively, Variety reports. The news comes just well over a month after a star-studded premiere in China was about to commense with actor Hayden Christensen and producers from Arclight on hand to lend their support for the film’s release at the time before Yunnan Film Group pulled the plug entirely, without warning, and to date, still no answers.

“We have never been given a full explanation for the problems. But it is clear that Yunnan Film Group still has great confidence in the movie,” said Bolt. “They had final cut and paid attention to details that would make the film right for Chinese audiences. They also bought out the North American rights, which shows their faith here too.”
A Chinese, French and Canadian co-production, Christensen joins actor Nicholas Cage and Andy On, and actresses Crystal Liu and Jike Junyi in a story of a war-weary crusader and his older, legendary comrade who step up to save a kingdom from a deposed fugitive Emperor and his sister from their power hungry uncle. eOne is in final negotiations to distribute the new action thriller through Phase 4 Films with an eye to release the film on February 6, 2015 following its January premiere in China.
Stay tuned for more info, and if you .