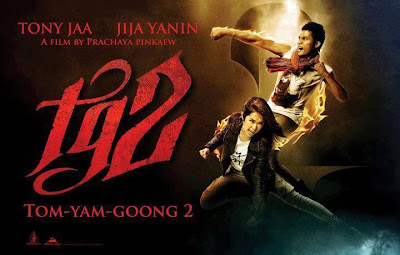 A new report from MThai interpreted via Martial Arts Action Cinema on Facebook indicates a possible release date for Tom Yum Goong 2 on December 5, 2013, thus dispelling any previously mentioned news of a release this May. The update comes just a year and a half after principal photography began with some bumps along the way, in addition to the history-making use of CGI and wirework on a Jaa film set.

The film will star Tony Jaa reprising his role from the first film as Kham, and Petchtai Wongkamlao returning as Sergeant Mark, with Prachya Pinkaew returning as producer and director. It will also star Thai action stars Dan Chupong, Kazu Patrick Tang and Jija Yanin. The Man With The Iron Fists star, writer and director, RZA, is also joining the cast with his TMWTIF stunt double Marrese Crump, who is also choreographing the action sequences with Jaa, co-star Vince Makilingwith and Panna Rittikrai.

Provided that the news is true, hopefully we will see a new teaser in the coming days or weeks. Stay tuned.