Crowdfunding for an inspired project of any kind is likely going to be a difficult hurdle to leap these days. Filmmaker John Balazs is considerably one of the more fortunate ones – having attained what he needed by other mutual means to fulfill what he wanted with his latest filmic venture, Night Shift, and as far as proof of concepts go, audiences are more than welcome to let their imaginations run wild some.

Today’s stretch of action cinema mostly stands far from the brutish, simplistic style of 90’s action and the frenetic, shaky, dizzying editing and shooting methods of the early millenium. Balazs is well placed in distance of these, embracing a competent style of direction with a much more streamlined focus in the way of select flaws that allow him to grow as a director otherwise capable of assembling solid pieces of work to draw attention.

Just as he did so on his multi-award winning short, Dancer, Night Shift puts him back on track in an attempt for further nominal successes. Up-and-coming actress Adele Elasmar stands front and center, toggling between flashbacks and a story in-progress that immerses you in the troubled psyche of Bianca Fury, a tough-as-nails cop recovering from a tragic hostage incident that previously stagnated her service as a Senior Police Constable.

To make matters worse, her work relationship with partner, Tony (Stephen Degenaro), is all but rigid with Tony being dismissive to Bianca’s inner-trauma for want of a breezy night patrol – that is, until Tony requests a pit stop in a seedy alleyway. The two beleagured partners come face to face with a Jo (Liz Conrado), a notorious crimeboss now shepherding the organization handed down by her father, Big Jo.

With Jo eager to assert her newfound authority and Tony, apparently in debt and way in over his head with Bianca caught smack in the middle, tensions reach critical mass as fists and feet begin to fly in an all-out brawl between both cops Jo’s henchmen. In an instant, Bianca is framed for murder and left vulnerable with no immediate way out, forcing her to become a one-woman army and face Jo’s gang of killers at any cost.

The initial teaser for Night Shift was an exciting peak into what Balazs had in store, and so screening it for the first among maybe half-dozen times proved truly fascinating with Elasmar flexing more than her fighting muscles. While there are moments where the choreography is obvious, that she devoted herself to six months of learning, fight training and rehearsing as prerequisite ultimately reflects positively in her performance.

What’s more, that Elasmar is an actress first is a plus when coupled with the intensity, raw strength and resilience she brings to the role of Bianca, making Night Shift quite the rewarding character study. Her role’s connection to that of Degenaro’s Tony invites ambiguity with respect to an even deeper connection imaginably worth exploring while Liz Conrado delivers a seething, solid antagonist in the role of Jo following her performance in Dancer next to that of husband, Dancer star James Conrado who lends Night Shift a brief cameo of his own.

The centerpiece of it all takes its clear and visible queues from Gareth Huw Evans’ The Raid and in doing so, lies the inevitable testament to see if one can meet the standard given that Evans is responsible for reshaping the landscape of expectations in martial arts action cinema. Balazs’s apt application does wonders in this regard bringing non-stop fervor and consistency in pacing and speed of many of the fight beats to make the action sequences work.

Degenaro, who I’m told has had some background in martial arts, presents a fighting performance worthy of praise and potential for his cursory screentime. Equally, Elasmar’s Bianca literally races between moves, even taking kicks to the head as one can either debate as a matter of strategy or of impulse with the adrenaline rushing and survival instincts kicking in.

Balazs’ biggest nod to cult Indonesian action cinema in drawing an all-male line-up of brooding gangsters is the one most visible with Apples, played by stunt performer and action actress Zia Kelly. Jo’s right-hand, apple-eating menace stands out whilst donning all yellow in a mild Bruce Lee homage a la Raid villainy, oftentimes silent throughout the short, and while not a martial artist herself and having comeback strong from a severe knee injury many in a year prior to pre-production, still proves herself favorably in keeping up with Balazs’ vision.

If there is one area worth taking some level of issue, it might be with some of the choreography. The majority of the techniques are kept simple, and ultimately repetitive at times, and yet it’s that simplicity that provides the convience of seeing a performance bolstered even moreso by dramatic caliber amid the physical strain of fighting between takes.

For an actress just breaking her stunt fighting shoes in after six months of brutal rehearsals, topped with experience in the form of both arms and legs covered in welts, there’s no question that Elasmar provenly holds her own. Balazs pulls no punches in debuting Elasmar in such a fashion with an opener that shows our heroine cutting loose on a punching bag before cutting into a contemplative moment in the shower, which is enough to invite a sultry air with our heroine’s stoicism minutes prior to things getting intense. 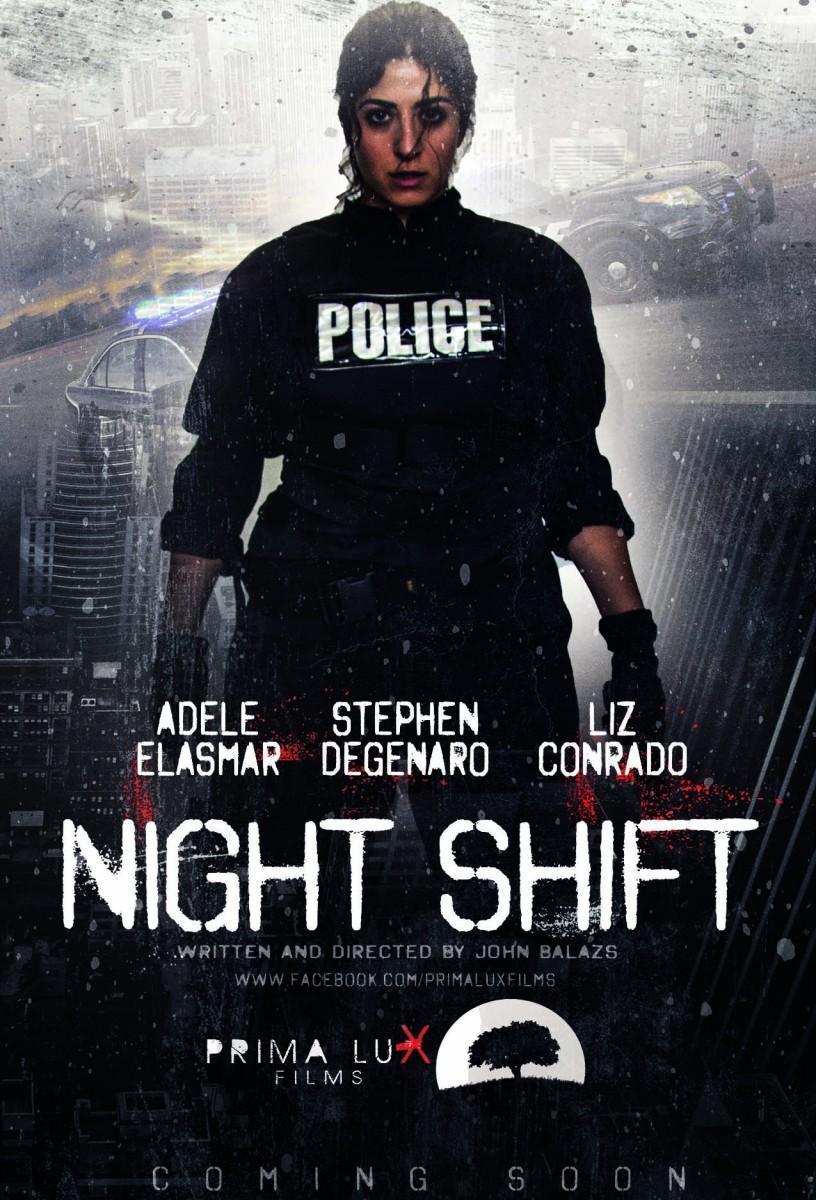 As far as proof of concepts go, it would be worth considering if somewhere along the line, somebody took interest in actively developing a series. Bringing Balazs on board to meet the creative ends would service the property well in building a thrilling, action-infused crime drama world centeted on multiple character’s with that of Elasmar and Degenaro even serving as principals.

Whether or not that happens remains to be seen as Balazs readies a festival run before debuting Night Shift to netizens later this year on his own accord. As for Night Shift in its current form, as long as I’ve been following Balazs in his exploits and covering his work, consider Night Shift as plenty ample in reasons why you shouldn’t sleep on him.

Stay tuned for interviews with John Balazs and Adele Elasmar next week!

Korean Epic THE GREAT BATTLE Erupts With An Official Trailer Don’t Miss The Final Trailer For ALONG WITH THE GODS: THE LAST 49 DAYS

GANGS OF LONDON S2: E3-E6 Review: Backstabbers And Gamechangers As War Erupts On The Streets