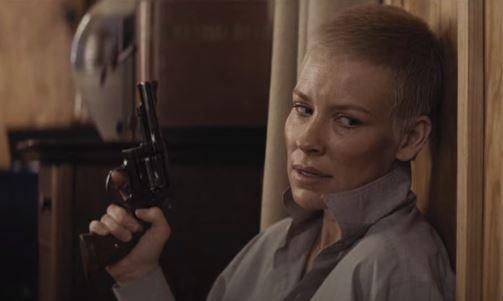 SOUTH OF HEAVEN Review – A South Texas Tale Of Revenge.

SOUTH OF HEAVEN was not the original title for the latest film from Israeli writer/director Aharon Keshales. It’s not unusual for films to go through title changes during production but I was struck by a curiosity- wondering how a clever enough title like “Till Death” became the more somber “South of Heaven.” Why choose that phrase for a new title? When I researched the phrase the only thing that consistently popped up was a song, I was passingly familiar with by the metal band Slayer. Stranger connections in pop culture have occurred before, I suppose. So, I thought about this song I had not heard since my young and angry days and how it may add to the understanding of this southern-fried piece of neo-noir from one half of the filmmaking team behind the mean-spirited, yet darkly comic, thriller BIG BAD WOLVES.

SOUTH OF HEAVEN Review – A South Texas Tale Of Revenge.

“An unforeseen future nestled somewhere in time. Unsuspecting victims no warnings, no signs. Judgment day the second coming arrives. Before you see the light you must die.”

– The opening verse of “South of Heaven” by Slayer

Jimmy Ray (Jason Sudeikis, TED LASSO) is facing an unforeseen future. Recently released from prison, after serving several years for a bank robbery conviction, so that he can care for his love, Annie (Evangeline Lilly, ANT-MAN AND THE WASP), who has been diagnosed with cancer and given less than a year to live. He simply wants to do what he can to give her a taste of the life his bad decisions cost them both. Almost immediately upon his release though, Jimmy Ray is pulled by force back into a life of dishonesty by his corrupt parole officer (a seedy, mutton chop and ten-gallon hat-adorned Shea Whigham, FAST & FURIOUS). As if this isn’t bad enough, an unexpected occurrence on a backcountry road and a hasty choice made by Jimmy Ray will lead all three of them into violent conflict with a serene, yet vicious gangster named Whitt Price (Mike Colter, LUKE CAGE).

SOUTH OF HEAVEN is a deceptively dark film. It uses the inherent dopey “aww shucks” charm of Sudeikis and the grace of Lilly to bring the audience in immediately before inevitably pulling the rug out from underneath them and the viewer. The urge for this all to just culminate with the couple living out a bittersweet year of love and loss is strong in the fleeting moments of peaceful togetherness they have onscreen. The fates have other plans though and it’s heart-wrenching when it is pulled away from them. The two are put through a series of increasingly dire misfortunes that feel like someone took the folksy characters from RAISING ARIZONA but placed them in the sinister world of another Coen brothers’ work- BLOOD SIMPLE and then peppered in the cruel and sudden violence of a South Korean revenge drama to really ratchet up the dread. SOUTH OF HEAVEN is as bleak as its heavy metal namesake, but it’s just hidden under an idyllic “down home” facade, like someone smiling and saying, “Well, bless your heart!” …right before cracking you in the teeth with a wild, brass knuckle haymaker.

The film wouldn’t be nearly as palpable, with its grim and twisty narrative, if it did not have the cast it does on hand. It’s easy enough to imagine a version of the film with noticeably younger, more marketable, leads but the obvious years lost that can be felt in Jimmy Ray and Annie make their desperation and strength feel earned and understandable in the face of mounting obstacles. The pair’s genuine and earnest quality helps make questionable logic choices of the narrative and the even more questionable southern accents from the two forgivable.

The film holds together entirely because of those positive qualities that having Jason Sudeikis and Evangeline Lilly front and center bring to it. They radiate a decency that is in perfect contrast to the scummy “good ol’ boy” vibe that Whigham inhabits his character with every time he is onscreen. You want to see the couple outsmart him and find a way to reach their goals but the plot of SOUTH OF HEAVEN, to its credit, never quite goes how one would expect it to. Looking back at that short song verse that leads into this review, before Jimmy Ray and Annie can reach the light at the end of this dark journey, they’ll have to face trial and judgment personified in Colter’s Whitt Price. While Lilly and Sudeikis are the glue of the film, it’s Mike Colter that leaves the biggest impression. Price is a truly great part for him, filled with as much nuance as the two leads, and honestly more depth, but he brings an added energy and vibrancy to it all that is magnetic. The script, at different points, asks him to be chillingly calm, devastatingly vulnerable, and believably dangerous and Colter makes the shifts in perspective look effortless.

Eventually, all the twists of the story and rash decisions by the characters culminates in a bloody explosion of gun violence that, while a bit jarring considering the backgrounds of all the actors involved, doesn’t feel gratuitous or unearned. The most surprising aspect of it is really how well the action-filled climax is handled from a craft perspective. It’s clearly shot and edited to show the actors in the fray with lengthy takes that are reminiscent of the “clean but not exactly tactical” style of action choreography present in mid-2000s era Hong Kong film bullet fests. The film’s final shootout is a well-delivered piece of catharsis, for the audience if not the characters themselves, at the end of the film. At the film’s true final moments though, after all the violence has settled and the literal sun has begun to rise- it’s clear that the title SOUTH OF HEAVEN was the only fitting choice for the film, regardless of its origins, because sometimes you land just south of where you want to be no matter how hard you try. (3.5/5)

Website
Matthew Essary has been a professional film critic since 2017 and a film fanatic for much longer.

Copy and paste this URL into your WordPress site to embed

Copy and paste this code into your site to embed