My weekend has been a little more entertaining than predicted – largely with my efforts on this site among other things. Furthermore, collecting Hit List content was a little bit more overwhelming but needless to say, I’m well over that hump because…well, I have stuff to do and catch up on. Ugh!
First up for this week’s installation of The Hit List welcomes a vimeo upload of filmmaker Dom Fred hailing from France who surprised me last year with several glimpses of his independent work, some of which you’ll catch in his latest demo reel via Vimeo. Following that is a nifty playlist featuring our weekly raft of stunt talents with reels by Jessica Meredith, Mark Poletti, Alex Dell’Aquila, Wadi Jones, Lance Lee, Jeff Mayfield, Cameron Early, Gaby Rodriguez, Aaron Field, Andrew Long, Fredrik Blom, Travis Staton-Marrero, Gabriel Ruan and Ryan Robertson with further choreography and coordinator designs and performance by Lawrence Carrington and Ramazan Bulut out of Germany for Bullet Action Design.
This week is sick with promotional fare and we begin with Art School Dropouts hailing a second season of their hit webseries, Nerf Assassin. Their trailer aired last week and it bookends with a special announcement so be sure to watch it all the way through.
Following that is a click-only project available exclusively over at Vidio with Reza Hilman’s new Indonesian action short, Asura, telling of two hikers who find themselves fighting for their lives against a deadly witch doctor deep in the forest. You’ll find the trailer here and the shortfilm itself here and once the project goes public, I’ll be more than willing to present it in a future Hit List entry.
You can also get a glimpse of the poster art just below which I’ve cropped together with another poster announcing Australian collective 9Lives’s latest endeavor, Saving Mercury. It’s lead actress, stuntwoman Olga Miller stars in it and having only shared her reels, it’s high time we got ourselves reacquainted with her awesomeness, and you can sample some of it in the most recent trailer just beneath via Instagram. 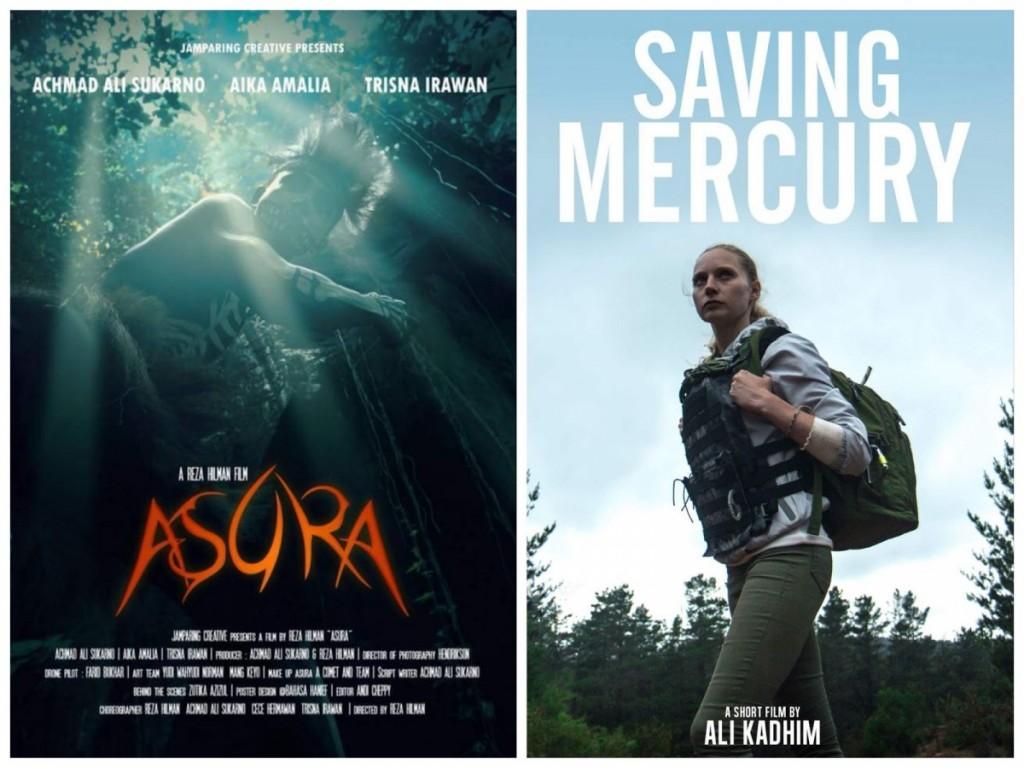 Time to take a brief breather from the fight action for a bit. Alas, when he’s not working in film or TV, stuntman, actor and fight choreographer Alfred Hsing has other recreational activities which he discusses over at his personal blog. One other avenue for this would be his very YouTube channel where he recently began engaging with top martial artists and fight professionals in some of California’s fine local eateries in a fresh and appetizing new webseries called Martial Arts And A Meal.

His latest installment with co-host Thy Dinh is already up and running featuring none other than actor and MMA star Cung Le as of February.

Check it out and enjoy!

It’s time to get down to the nitty gritty cinematic blacks and blues of brutal fight action with practice gems first off Kai Young lensing Priscilla Fontanez and Kirsten Anderson, John Jeffrey Arias with a pair of practice vids also showcasing stunt players Claire Hoogenboom and Gee Alexander, Kyle Murillo squaring off with Matthew Daos, Wildchild Gil Sanabria in Puerto Rico getting in some fight time wuth Jose Oslán and Alex Martinez, and a humble little practice piece in full from the aforementioned Dom Fred and featuring Kevin Lukata opposite Melanin Rosalin Heard.

New York City’s own 24/7 Star returns with a practice fight pitting Nishiyama Koji and Haga Akhiro for Brother, Jonathen Pantera Wallace sets the record straight over at Break Away Productionz in My Sister’s Lunch $$, Hung Dante Hong rematches with Luc Antoine out in the U.K. for stylishly filmed short, The Meeting, and Dave Macomber joined by Justin Eaton showcasing the very previz that set the precedent for the memorable fight finale in hit TV drama, Banshee with  actors Matthew Rauch and Odette Annabele.
Culminating it all for this week is the debut release of Fatal Blades from Golden Horde Productions. Film duo Tatjana and Temujin Shirzada and actor Leandro Mayor Martinez headline the new project currently being designated as the first of a webseries that sees trio of sadistic killers facing off against a man desperate to rescue his captive girlfriend as she attempts a daring escape of her own.
The project initially started off as a much shorter endeavor but per the nature of creativity, saw itself growing over time. What lies ahead remains to be seen while you can still enjoy the final product at the end of the playlist below, and feel free to look at the behind-the-scenes featurette that queues up in annotations thereafter.
That’s all for this week so be sure to sub to the channels for support and SHARE the Hit List with friends, and feel free to rebound with last week’s entries if you’re up to it. For further inquiry, if you or someone you know has a kickass demo reel, or a project that needs promoting or presenting, plug us in early-on at filmcombatsyndicate@gmail.com!