Welp, another work weekend has passed and I managed to finish the first of two interviews which are now airing as of this week. Accordingly, the work also extends to putting together new content this week for the Hit List, and there’s plenty to go around!

Kicking things off, of course, are the stunt reels, starting with the newest debut reel by Far East Action, a newly-formed stunt ensemble featuring highlights from some noteworthy titles as of late, including Kung Fu Fighter, Time Rush, Wolf Warrior and the 2015 blockbuster epic, Dragon Blade. Rounding it all out are new, fully-loaded stunt reels by Tonya Kay, Wendy Vrijenhoek, Corey Snowden, Justin Hall, Troy Castaneda, Ashley Oliver, Antonio “A.J.” Rachetta, Jasper Joyner, Kent De Mond, Becca GT, Martial Club in a high-impact kicking sesh with friends, and firey Australian martial arts stunt troupe, Dauntless MC, a noteworthy team among several behind something very special that’s about to happen within their backyard, and you can expect more reports from Film Combat Syndicate on that end in the months to come!

As always, just push play and let the player do the rest!

Moving onto the promotional bits for a sec, and there are three items on the list at the moment. The first pertains to the recently-launched crowdfunder for Joey Min’s kung fu comedy series, My Asian Auntie. 18 days are left to help fund the series which sees Min in costume and acting out various stereotypes in full-on satire, with some martial arts and slapstick to boot.

Min launched a poster last week on social media for the series, and you can view it below. It’s a little something, but if you’re keen, click here to learn more about it! 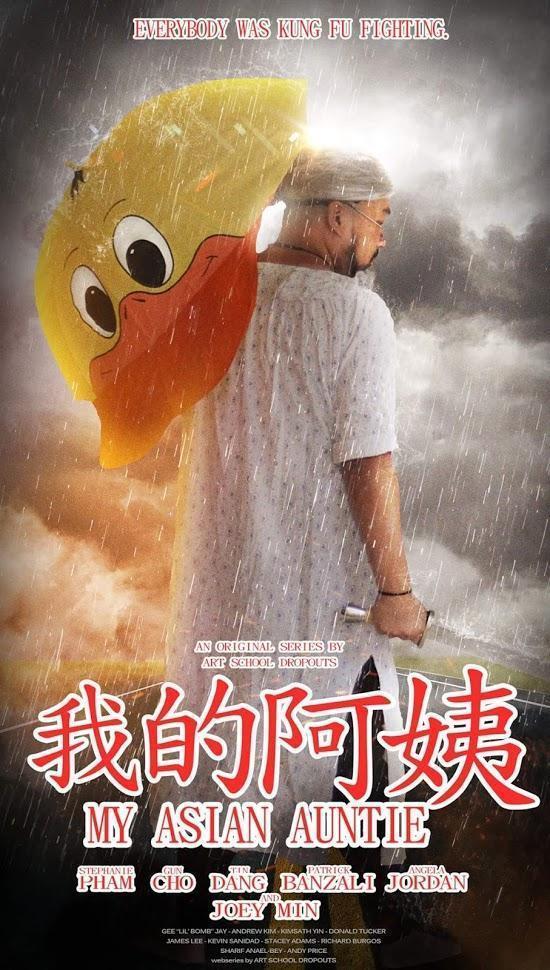 Just beneath here are two trailers and we begin with the third phase of one of the most zaniest, random, independently properties you’ll ever bear witness to, and it’s all thanks to director Jeff Lunzaga, Bande Dessinée Films and The Collective. Hetja 3 is the name and lends its credence to a world of creativity all its own, sold on fantasy, action, cosplay and hyper reality – with no reheased script, and the likelihood that anyone in front of the camera is part of the movie no matter what. No. Matter. What. And that sounds like something I would’ve enjoyed if I were part of this crew.

The project is designed as a featurette to help bolster San Francisco’s independent film and cosplay community in the Bay Area. An online air date is now due following its premiere at San Francisco Comic Con, while the trailer itself is already up and running.

Thereafter is the latest trailer for James Poirier’s kinetic new tactical action drama, Relapse which we exclusively ran last week on our site. The project premiered over the weekend at Action On Film Festival with a stong online release hopefully soon to follow, featuring an action-packed cast led by Gabriel Caste as a burned out special ops soldier on a reluctant mission with a former flame to rescue one of their own. The trailer plays right after the one for Hetja 3 and you can view it in the following playlist, and at any given point in time, click here and check out my review if you fancy it!

Alas, it’s back to kicking some more ass this week with some great morsels from around the web, and there aren’t any videos availabile that I could gather in shortform. So, I come bearing three, newly released gems now online, and the first comes courtesy of film duo Cristina Piemonte & Gianinni S. Moreira. There’s is a Vimeo exclusive which I found earlier on Monday in my newsfeed which pits action actors John Jeffrey and Moe Alafrangy along with Cassie Lee Minick, Josh Rasile, Robert R. Bell and Coty Galloway for the new high concept short, Metahuman X.

Coordinating the stunts and action are Rasile in assistance to Alafrangy – the latter who I’ve been following off-and-on ever since I first launched my Facebook fanpage in late 2012 and drew my attentiveness in martial arts cinema to the tricking community in which Alafrangy is well known. Apart from this, Metahuman X is a project that otherwise introduces me to the work CristinaGianinni FILMS in an epic fashion, and one that I had the good fortune of preparing for thanks to a mild mention by the awesome Minick who, in my humble opinion, is one damn cool stuntwoman.

Check her out among this fine group of VFX-laden stunt players in the video below!

Finishing things off are a pair of stellar new shorts now making the rounds, and in pure, epic, badass fashion at that.

Award-winning independent filmmaker, actor, martial artist and stuntman Kevin Barile pairs once again with the equally skilled Mario Rocha for the new shortfilm, The Has-Been which had its day over the weekend at the Action On Film Festival. Rocha, who himself is also up to star in a few other forthcoming independent features, takes the lead as a desperate, washed-up B-movie star forced to break into someone’s home to steal a prized award in order to get his movie made, an effort that finally sees him cornered in a backyard with no choice but to fight to the finish!

Topping it all off is an exhilarating new 20-minute piece that immerses viewers into a striking medieval world filled with fantasy and imminent danger. It’s the new shortfilm, Jagon with a slew of festival screenings in its wake and now making the rounds with actor Halit Dajdzo as a man mistaken for a gatherer as he’s pitted against evil forces in search of a saracen princess and her mystical rosary. Hannes Höhn and Johannes Kunkel produced the shortfilm with award-winning helmer Murat Eyüp Gönültas (a.k.a. MEG) directing as per their student shortfilm efforts at Filmakademie Baden-Württemberg, and endured several nominations in various categories at Big Island, Brooklyn, HollyShorts, Landshut and Max Ophüls. To say the least, that this one got as many mentions is it did speaks greatly to the results now seen in the final product, boasting stunning visuals, stylish action and a sense of ambition that wholly deserves the attention for something more grand and major as a project.

Dajdzo is joined by Mustafa A. Kuzu and Giannis Ziogos, and actresses Veronika von Lauer-Münchhofen and leading lady Lin Gothoni who shines as our saracen damsel in distress…or so we think!

Above all else, press play to start the playlist and enjoy both online shorts now!

Any search for more action is best suited to last week’s gathering of action packed feats until next Monday. For all else and more, stay tuned to Film Combat Syndicate or contact us at filmcombatsyndicate@gmail.com and let us know what you’re up to if you’re a filmmaker and/or a talented stuntman with something to share to the viewing public!