The Spirit Of Endurance Lives On In The New Kickstarter For Martial Arts Revenge Drama, HEART 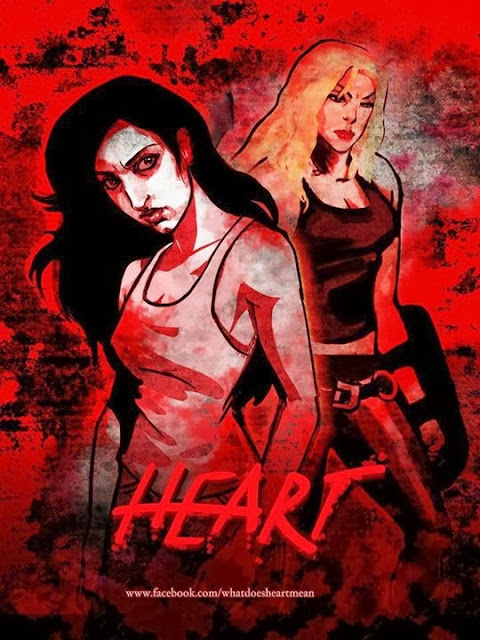 Independent filmmaker Frank Hernandez and executive producer, dancer and actress Jennifer Faust are hosting a brand new kickstarter campaign this week aimed at building awareness to fund their new inspired film project, Heart. Starring Faust opposite actress and associate producer Inder Mundi, the film is described as a martial arts revenge story of triumph over relentless tribulation, centered on a young woman who ventures in a downward spiral as she grieves over the tragic loss of her brother throughout her obsessive search for his killer.

Heart is also the latest collaborative effort for independent film group Atom Phly Media and independent action and choreography team, Dardrex Productions, since previously teaming together on last year’s season of the zombie action horror webseries, The Living, which Hernandez co-created. Hernandez also directed the summer 2012 spirited prequel to Heart titled Keep Going, with actor and Dardrex Productions founder and fight choreographer, Darren Holmquist, who I had the opportunity to talk to regarding his participation in Heart, in accordance with his experiences with Hernandez to date.
“Well I’ve always respected Frank (the director) as a collaborator, and most of the time we’ve worked together it’s usually been on my films or a project we are both attached to such as ‘The Living’.” he says. “But I’ve always considered him a triple threat as a director and I know it takes time before he finds a story he wants to tell.”.
Holmquist expanded further more when I asked him what he meant in his description of Hernandez as a “triple threat”, illustrating in many ways how their partnership as friends, filmmakers and action fans have benefitted each other. “Frank is more than just ‘a director’.” he says. “He is my right-hand man on filming fight scenes. And, I’ve brought him in on projects I was attached to sometimes just to simply film the fight I was choreographing because other camera operators and DPs (Directors of Photography) had no idea how to shoot action. Frank is also a great editor as he and I worked 50/50 of the transitions for Keep Going, and I let him edit my scenes in the locker room so that he could edit my performance (as it was difficult to act for what was not there). Plus, his skills in VFX are great as he’s the go-to-guy from titles to logos, and adds that stylistic flare to projects he’s cut. Lastly he’s a storyteller. You see his vision clearly in his projects like his musical ‘ToGetHer’ or even as much his vision as mine in ‘Keep Going.'”.
Heart will also feature music by singer and songwriter Adien Lewis, with vocals by The Living co-star, actress and singer Katherine Park, who spoke highly of Hernandez whom she met back in 2011. She tells Film Combat Syndicate, “I had a chance to watch Frank work on ‘The Living’, and he was so dedicated to the project he actually injured his hand from too much editing and camera use. He’s extremely driven and a good person, too.”.
Heart is set to begin filming later this Spring while Holmquist and the cast continue to train for their upcoming roles. In the meantime, check out Holquist in action in the 2012 shortfilm Keep Going with Thomas Tan, Orlando Redden and C.J. Riot in the embed below, and be sure to head over to the official kickstarter page to view the official campaign video for Heart to hear personal stories from the cast, director and others, in addition to details on how to donate and the perks you may earn, and much more!
Also, subscribe to the film’s official Facebook page to stay up to date on the film’s progress.

Lots Of New Footage In The Final Trailer For THE MONKEY KING 3D! Jean-Claude Van Damme Kicks Nature In The Face In The New Red Band Trailer For WELCOME TO THE JUNGLE!