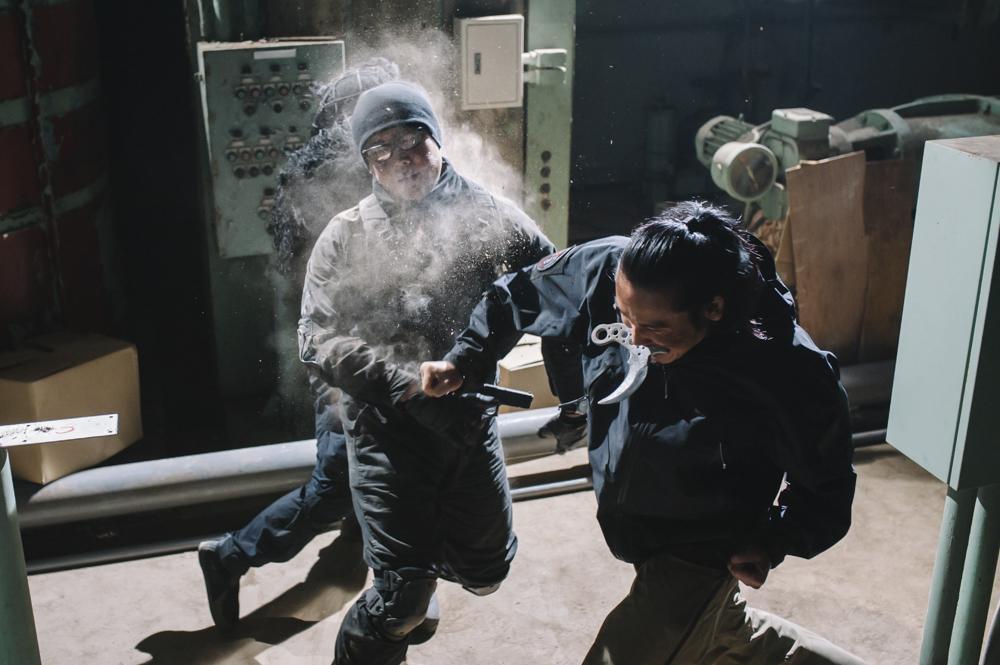 It’s been nearly sixteen years actor Sakaguchi Tak appeared before me in a lovely action horror indie called Versus. Having fondly grown favorable toward Sakaguchi’s work over the years, I can certainly attest now along with others who have been fortunate to spot his latest and long-awaited return to film and reunion with Death Trance director, longtime friend and film cohort, stunt professional and filmmaker Shimomura Yuji for the new CQC action thriller, Re:Born, in which Sakaguchi (billed in the film as TAK∴) plays Toshiro, a reclusive store clerk whose past life as a clandestined killer soldier comes back to haunt him and the young girl in his care.

I won’t go too into detail for this post, but I will assert, at the forefront of it all, that Re:Born services its target fanbase with some of the best, fleshed out action sequencing ever put together by a stunt team and a star who is no stranger to screenfighting. The story is gripping and carries its weight with intelligence, charm, a dose of intrigue and a subtlety that clutches you in its death stare at the last minute with as much fearsomeness as Sakaguchi does from millimeters away just after he dodges all of your silly bullets; Seriously, I love how the star’s character was written – realized and executed in such a way that may very well rival that of almost any horror movie icon you’ve come to know and love in the last four decades.
The action is fresh and pure in all its simplicity with a style assembled and emulated perfectly for the film’s tone of violence and gore as well as the overall pacing and energy of the lighting-fast-as-fuck techniques involved (yes, you read that correctly). Some stunt peers will have opinions of their own on it while it’s also worth noting that the style of fighting formulated for this film is made to look as feral and instinctive as it needs to be – ultimately as if these scenarios were a real setting apart from its fantasy millieu.
Talking vaguely on certain highlights, there are definitely some major bookmarks spotlighting Sakaguchi’s own character development that you’ll want to take into mind; His screentime with actress Hasebe Hitomi is something very much worth paying attention to next to young actress Kondo Yura in the role of Sachi, comprising the very heart and soul of the film, and equally, Toshiro’s stoic existence as he struggles to maintain his peace and sanity by medicated mouthfulls. Otsuka Akio seethes on screen as the villanous Phantom who is much more than he appears to be with a certain skillset that emerges as the film weaves together its story direction.
The cast at large is featured perpetually in the film’s action setting some purely unique moments and enlivening performances, and with great set locations such as alleyways, a courtyard, and the wooded forest that preambles the stellar fight finale in the third act. Actress and stuntwoman Sakaguchi Makoto herself is one of the biggest influences of enjoyment in this area having previously showcased her talents aptly in works like Miike Takashi’s Yakuza Apocalypse and Sono Sion’s Tokyo Tribe. It is here in the role of Casper, a subordinate working under Phantom’s command, that she absolutely shines in her element with pure grativas and performance caliber that will very much leave you charmed and entertained.
With TAK∴, everything from his chemistry with other characters to the way he carries himself as a screenfighter is indicative of someone who has admirably grown in his craft regardless of the hampering his career nearly suffered in recent years. He isn’t the greatest actor, but he can certainly perform roles in ways that work and befit the narrative and thus, I cannot ever recall a time when I have never not loved TAK∴’s work in most of the movies I have seen him in. It is partly why I had my hopes up for a Death Trance sequel when one was rumored to be announced around 2013 until reports started circulating that the star was suddenly “retiring” – news that shook the fans to our core and had many of us lamenting with questions as to why.
For this, my appreciation for TAK∴’s craft, friendship and film partnership with Shimomura and that of combat specialist and co-star Inagawa Yoshitaki who plays the brooding and deadly Abyss, has increased even further. Moreover, apart from the driven performances of the cast and overall delivery, I hope, with every ounce of my being and sincerity, that this will not be the last we hear from Sakaguchi and Shimomura in either of their careers. I really do want more from these amazing people and I also look forward to buying a copy of this movie once it officially opens in the U.S. now that it’s available in Japan and the U.K..
In my most serious of urgences, Re:Born serves as an exemplary spotlight on good, quality action cinema that deserves all the profusion it can get. Today’s market won’t allow wide releases for niche films like this at the same rate as overbloated and big scale movies tied to a popular IP, which by-and-large just plain sucks and I stand by the notion that this ought to change. That being said, if you REALLY love action movies and Asian cult cinema, or even films in general, then I wholly recommend purchasing and supporting this film in favor of some of the best film and action talent you will ever bear witness to, regardless of what your perspective is.
If you have never heard of Sakaguchi Tak (or TAK∴ for that matter) at all before this year, start your favorite new habit with Re:Born when it comes your way. It WILL be worth it. And this cast and crew most certainly deserve it.