ANIMAL WORLD: All Cards Are On The Table In The New Official Trailer 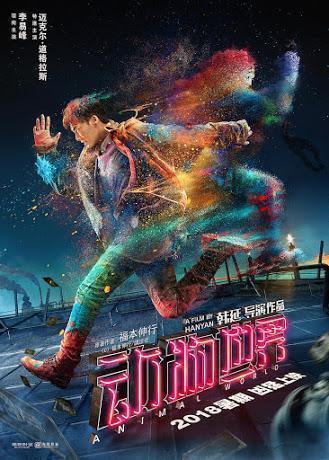 It wasn’t long after the most recent teaser trailer for HanYan’s fantasy thriller, Animal World, that social media started spawning memes boasting actor Li Yifeng’s role as akin to that of Asia’s answer to Deadpool. The action looks undoubtedly spectacular along with the visuals we’ve so far seen and the tracking progress of this film doesn’t appear to be softening anytime soon.
Alas, the campaign has since ramped up with a trio of character posters all hinting at key elements of the plot that ensues per the film’s nod to the original manga, “Ultimate Survivor Kaiji”, ongoing as of 1996. You can check those out just beneath the second official trailer now running online and with English subtitles which should be making the rounds later this year as the film ramps up festivals and market sales for international audiences.

Zheng Kai Si (Li Yi Feng) has nothing in his name and in order to pay off his debts, he goes aboard a cruise ship as one of the players in a deadly game. It’s a game of lies and deception to outsmart the enemy and emerge victorious. For the sake of his mother and his childhood friend Liu Qing, Kai Si struggles to survive.

It’ll also be interesting to see if Sato Toya’s adaptations regain footing; HanYan’s film here is the third and latest take on the IP since the live-action Gatchman helmer spawned a 2009 feature iteration with Fujiwara Tatsuya, and a sequel in 2011.

Both are distinctively different from the current director’s vision in that we now get a more visual effects-heavy display topped by a killer clown with deadly prowess among other things. Clearly Yan was going to have to find a way to sell this film and he’s clearly worked hard at doing so. Because that’s how you sell a film that’s been remade twice over like this to audiences – many of whom may be unfamiliar with the original property, now matter how slight derivative it might be: Make it big, make it dazzle, eyepopping, and to that effect, substantive, and too impressive to ignore. And if the footage now running online does nothing else, it most certainly does that. And no one appears to be complaining that I know of, really.
Nice!
Also starring are Michael Douglass of Antman fame, and Goldbuster co-star, the delightful Zhou Dongyu. Enjoy the new trailer below, and for that matter, comment below and let us know what you think!