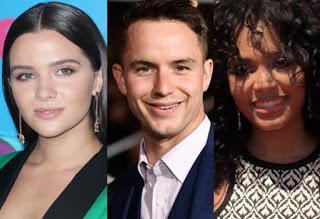 Sierra/Affinity, home to hits like Drive and spy thriller Atomic Blonde and has since added upcoming horror thriller, Haunt, to its catalogue with production now underway in Kentucky. Scott Beck and Bryan Woods (upcoming A Quiet Place) share writing and directing duties with a cast that includes Katie Stevens (Freeform’s The Bold Type) and Will Brittain (Kong: Skull Island, Everybody Wants Some) along with Lauryn Alisa McClain, Andrew Caldwell, and Shazi Raja.

On Halloween, a group of friends encounter an “extreme” haunted house which promises to feed on their darkest fears. The night turns deadly as they come to the horrifying realization that some nightmares are real.

IMPOSSIBILITY DEFENSE: Catch The Chilling New Teaser Trailer From The Director Of ‘Sadako VS Kayako’ VENOM Seeps Into Production As Cameras Roll This Week