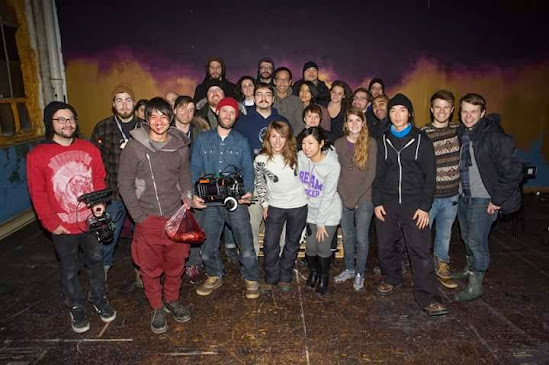 Considering the electrifying responses that lit up the internet roughly one year and three-million views ago with the release of the independently-produced anime/manga-inspired fan trailer, The Akira Project, it’s reasonable to wonder what else the crew behind it has been up to since then. Well, indeed, the team has moved on to other matters of creativity which will no less continue to appease the masses of fans they’ve earned with a fresh new project that is just as slick and full of action and promise.
I’m talking about the new shortfilm, Temple, and the return of filmmaker Ngyuen-Anh Nguyen, now represented by 3 Arts Entertainement and back at the helm with a feat in which he aims to harness everything he loves with film, martial arts, manga and science fiction wrapped into one. Also seen is the return of action actor Osric Chau who previously worked on The Akira Project, now ready to display an array of stunning martial arts to accompany the aesthetic set in the following setup:

By 2085, ocean levels have risen to a point that entire coastal cities and islands have been submerged. On an island megalopolis, a genetic virus and cybernetic beings are threatening the survival of its population. Oz, a health services employee, must find a way to survive amidst the swelling chaos.

It’s become clear that Nguyen and his team are risng in prominence, and it’s a sizeable help to their current cause as they look ahead to bring their concept to different studios to help finance a hopeful feature film. As for the short, fans can look forward to its release possibly in June following its upcoming teaser which is set to arrive this coming Monday.

In the meantime, feel free to check out an exclusive batch of impressive new stills in the album below and look up the official Temple fanpage on Facebook!

*Special thanks to Martin Wan for the assist!