Check Out The First Official Poster For THE FOREIGNER 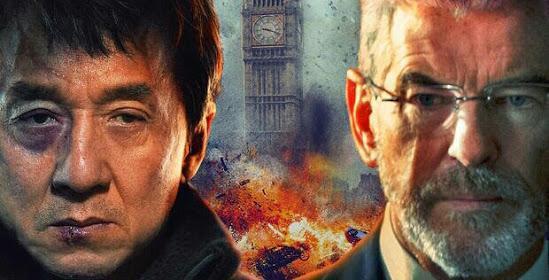 The past few months have been upheld on all things Jackie Chan with his most recent adventure, Kung Fu Yoga. Now over the hill we venture into darker and more gritty territory as we witness Chan join actor Pierce Brosnan for Martin Campbell’s latest, The Foreigner which saw a lo-fi image go viral last week following its appearance in Berlin last month.
That image mostly now comes brandished on the first official poster which still doesn’t present much to be impressed over, but polished nonetheless and as the first official piece of art for the film now aiming for a Fall release. The film, inspired by the 1992 Stephen Leather book from screenwriter David Marconi, spots Chan in the role of a distraught London Chinatown restaurant owner forced to take matters in his own hands when the law fails to bring justice down on the IRA terrorists responsible for his daughter’s death.
Wayne Marc Godfrey and Arthur M. Sarkissian are producing the film as one of the slate of prospective titles from STX Entertainment.
Check out the poster now.