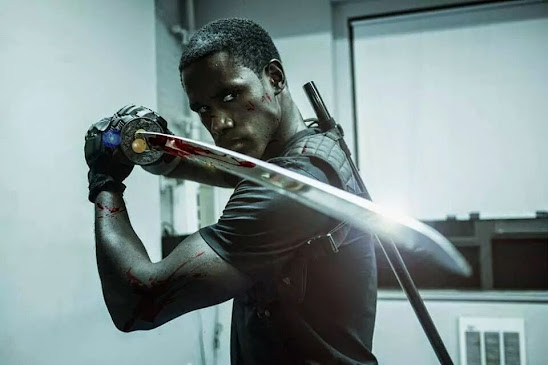 While the big studios sort out the possibilities for the future of the Blade franchise with lead Wesley Snipes finally back at work, the character is obviously not limited to just what Hollywood can do. The independent scene has its own fair share of creativity in store, and the folks over at New York City’s Cinematic Fight Studio are honing into theirs with the early release of a concept poster for a new possible fan film titled Blade: Chronicles Of Eric Brooks.

Up-and-coming actor Ricky Barksdale can be seen branded on the indie film fight studio’s newest poster as it was unveiled this week. The poster marks the first step toward a hopeful fan-driven shortfilm spin-off based on Marvel’s highly popular eponymous semi-human vampire hunter, centering on his earlier years as his pre-Blade alias, Eric Brooks, with a crowdsourcing effort to follow and help finish the post production process. Check it out below:

A teaser photo was first offered a few months ago (as seen at the very top) as Barksdale had already begun training with the studio and its co-founder, Lang Yip for sometime now. It will be one of several attempts by online content creators and filmmakers to keep the character alive after New Line’s stellar trilogy ended with a lesser-received Blade: Trinity in 2004, followed by an ill-fated TV series and short-lived animated feature thereafter.
With any luck, we’ll hear more much sooner about who will make up this inspired entry into the Blade universe through independent film as Barksdale and his team over at Cinematic Fight Studio embark on their newest venture. In the meantime, subscribe to the Facebook page and get ready! Soon…it’ll be open season on all suckheads!

A New Soldier Enters The Battlefield In The New Trailer For HALO: NIGHTFALL The AVENGERS: AGE OF ULTRON Teaser Trailer And Poster Are Officially Online!