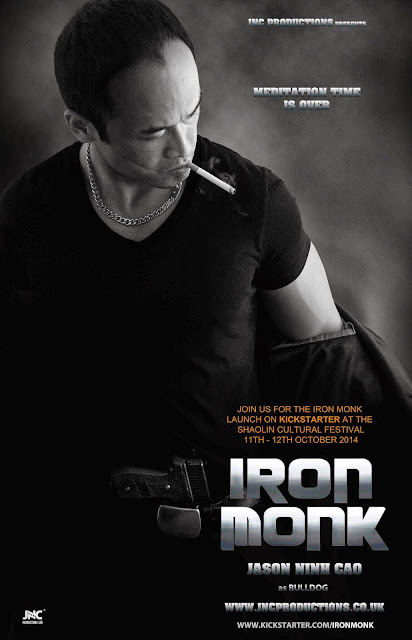 In THREE days, Shaolin Temple UK will be host to the 3rd Annual Shaolin Cultural Fest, where actor and producer Jason Ninh Cao (Once Upon A Time In Vietnam) will introduce his newest Kickstarter for the hopeful production of the spiritual martial arts thriller, Iron Monk. Many of you may have already seen a promotional teaser for the film already online for a few years now, but Cao and his team, including debut director Mat Sunderland are making 2014 their banner year for the film’s push through crowdsourcing.

As the festival kicks off this week, Cao and his team are already putting some cool merchandise together for the event, and is now offering Film Combat Syndicate readers an exclusive opportunity to win signed Iron Monk post cards, one signed Iron Monk T-shirt (as will appear in the upcoming Kickstarter campaign video worn by the film’s debut actor, Shaolin Temple UK founder and Shaolin monk, Shifu Yanzi Shi) and a chance to meet Cao and Sunderland upon attending the festival this weekend. All you simply have to do is answer the following question:

Send your answers directly to filmcombatsyndicate@gmail.com – Only FOUR respondents with the best answers will be selected to attend the festival this Saturday and Sunday and claim. The contest is exclusive to UK residents only, and the deadline for your answers is this Friday when the winners will be announced on the Film Combat Syndicate Facebook page. (REMEMBER: You must cover the cost for entry into the festival!)
The 3rd Annual Shaolin Cultural Festival is aiming to be a huge event, so feel free to visit the official website for more information, and spread the word to your friends and fellow kung fu aficionados.
And also, stay tuned for this weekend’s interview with Cao for the promotion of his new film!