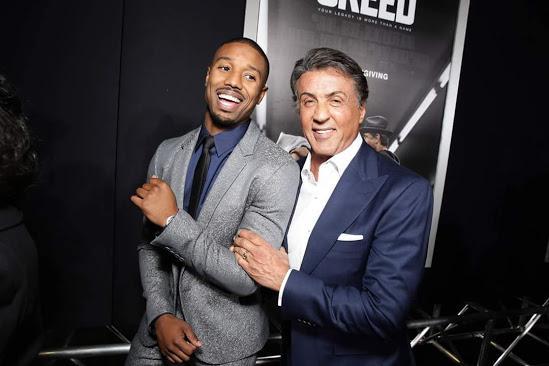 Over the weekend, Sylvester Stallone won a Golden Globe award for his supporting role as an aged Rocky Balboa in his latest page-turning signature boxing drama, Creed, starring Michael B. Jordan. This, coupled with an onslaught of upworthy reviews and a box-office total of $105 million dollars, is all very reassuring of prospective talks for a sequel, and accordingly, MGM CEO Gary Barber is making it so.

Barber confirmed to Variety in a new report on Monday that while an official date is not set in stone, a follow-up could arrive as soon as 2017 with Jordan returning as the son of Rocky cinematic mainstay, Apollo Creed who starred in the first four films of the boxing saga. The talk is also that in this case, the plan for a plot may well include having actor Carl Weathers portray him in some capacity according to ideas presented by Creed helmer Ryan Coogler who directed the film following his turn at Jordan’s performance in Fruitvale Station which became the talk of many an award show in the last several years.
The article also mentions that Coogler, at best, may executive produce the sequel considering he may have other plans, which could include helming Marvel’s Black Panther with Chadwick Boseman. At any rate, the tentative 2017 sequel currently leaves the director’s chair empty as it’s all very early to tell where the chips will fall and when.
Stallone could also reprise his supporting role in the forthcoming sequel as well, among other plans he may have plenty of time for since terminally distancing himself from all things Rambo last week. The actor is also expected to return to the fray for a fourth installment of the Expendables franchise following a China co-production deal last October.
Stay tuned for more info.