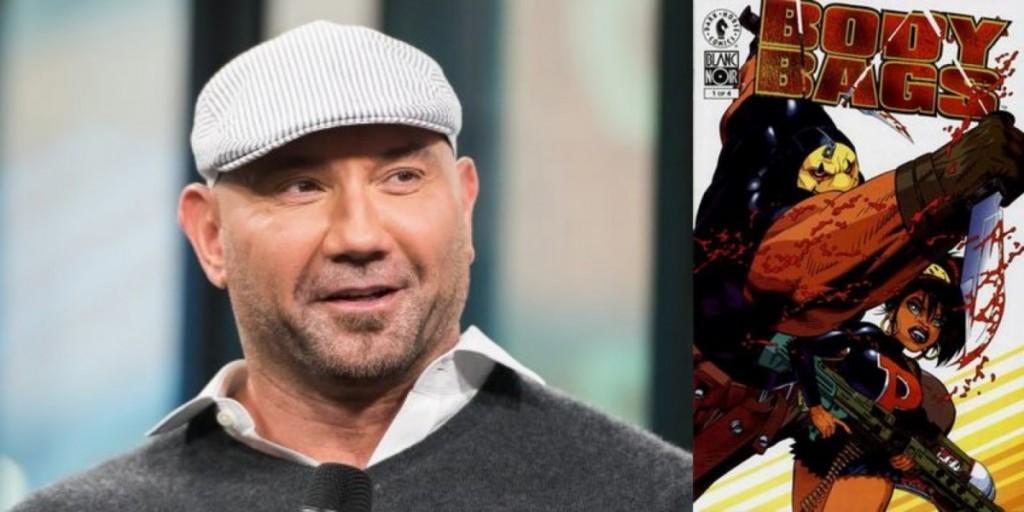 Mike Fleming Jr. at Deadline is bringing the latest on comic adaptation, Dogtown, set up at Bold Films for Dave Bautista to star. Kyle Ward (John Wick: Chapter Two) is penning the film derived from Body Bags, Jason Pearson’s Dark Horse imprint publication which also shared space with Image Comics during its run from 1996 through 2008.
Packed with quite a bit of R-rated potential, Dogtown aims to perpetuate the original comic book’s style and irreverence with Bautista playing Mack Delgado, a professional bounty hunter notoriously known as a “body bagger”. Things take an awry turn for Mack when the daughter he never knew makes a surprise entry into his life in hopes of reconnecting with him.
Gary Michael Walters is producing at Bold Films, adding the film measures right in its potential next to hits like Baby Driver, John Wick and Atomic Blonde, saying:

“We see a market for people who want to see something besides superhero movies.”

He is joined at Bold by David and Michael Litvak and Jon Oakes, and by Hivemind’s Jason Brown and Sean Daniel. Executive producing are Bautista, Rawson Marshall Thurber, and Jonathan Meisner with Bold Films’ Josh Throne and Svetlana Metkina.

“This is our first big graphic novel based action movie, which marks an exciting transition at the company,” Walters told Deadline. “We are moving into larger budgets, something that started with Stronger. We want to make baby blockbusters, where you take wall to wall action, and then scalpel back some of that action and inject more plot, theme and character. The hope is to give a big entertainment experience with a lot of ideas and interesting characters. The ambition of Dogtown is to have a Deadpool  tone of humor and action, but at its core, Dogtown is a father-daughter love story about a tough man who reconnects with his daughter. That is the spine. We want to make action movies with heart.”

“Dave has quickly become a very appealing as action star; he’s huge, muscled, and can easily sell the action,” Walters said. “But he has delivered in comedy with the Marvel films, and showed the emotional range in Blade Runner. He’s a well rounded actor and we need that because the heart is key and he has that soulful quality. And the U.S. distributors love him.”

“Dave was born to bring Jason Pearson’s hilarious, subversive, and beloved comics creations to life on the big screen,” said Hivemind President and producer Jason Brown. “Like Sin City or Kick-Ass, Dogtown has a style all its own – a fast-paced action-comedy that’s as much fueled by adrenaline as its emotional family dynamic.”

The search for a director is currently underway while Bautista, the recent co-star of Avengers: Infinity War, revs up for next week’s premiere of Hotel Artemis while filming his current action starrer, Stuber, with Kumail Nanjiani, Iko Uwais, Betty Gilpin and Mira Sorvino.