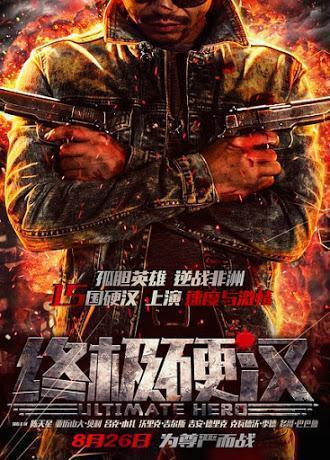 Remember actor and filmmaker Dragon Chen from Nunchucks (2012) and Kung Fu Fighter (2013)? Well, sure his resume extends a bit further, though pretty obscure unless you live in China and have a good footing in the local film market. Alas, having become a little more prolific in recent years, he’s back and at it again and this time with co-helmer Lei Cui with the new action adventure, Ultimate Hero which opens on August 26.
There’s not much to go on with no detailed plot available, save for mention of the story taking place in Ethiopia and Somalia where Chen is set in a cross-country battle pitting him against arms smugglers. That said, there is one saving grace for the campaign here, newly arrived in the breath of 24 seconds of nothing but solid action with an international cast at hand now seen in a first mini teaser which clearly aims selling an action thriller. Fighting? Gun battles? Car chases? Big kicks? Explosions? Yes, yes, yes and yes!
Also starring, and much to our delight, is actor and martial artist Alexandre Bailly who, once in pre-blonde hair mode, got his day in a shortfilm called Brothers Forever by the awesome Z-Team. He was a badass villain then and he looks amply radical here opposite Chen.
May a great trailer arrive soon after this, but check out the mini teaser below!