Gary Daniels Gets Ready To RUMBLE In A New Trailer! 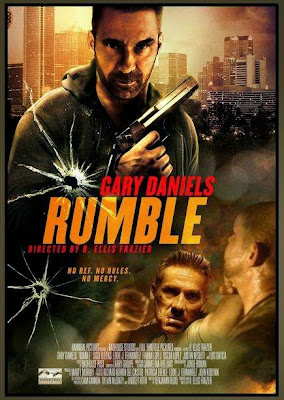 Following their previous work on last year’s action installment, Misfire, genre favorite, actor and martial artist Gary Daniels and filmmaker R. Ellis Frazier were already underway with their next in line, Rumble. It’s yet another entry into Daniels‘s screenfighting resumé as of late, now in the role of a aged fighter at the twilight of his MMA career, forced to battle his way through a line-up of underground fighters to save his kidnapped wife from the throes of a mysterious crimelord.

The film is written by Benjamin Budd, and is currently making the rounds for the film at Cannes at the behest of the reps at Hannibal Pictures. That said, following a first trailer from late last year, Rumble is back with a second trailer to showcase what fans are in for, which should be nothing short of a story of layered with intrigue, intensity, and the usual assortment of brutal, white-knuckle action with a lead actor who continues to present himself in fine physical form. With any luck, we should here some positive acquisition news soon enough. In the meantime, check out the goods below!
SYNOPSIS:

An aging and injured former MMA champ is forced back into a deadly Mexican underground fight circuit to save is girlfriend who is kidnapped by a mysterious cartel leader and criminal mastermind. With a pimp from Los Angeles extorting him and a Cop from Mexico City on the search for the infamous criminal mastermind, Delgado, David Goran finds himself deep in trouble in Mexico. As he fights his way out, he and the Mexico City Cop finally find out who is behind the infamous Bullpen Fight Club, where fighters fight to the death to save themselves and their loved ones.