Hell Faces A New Enemy In The Trailer For MANBORG 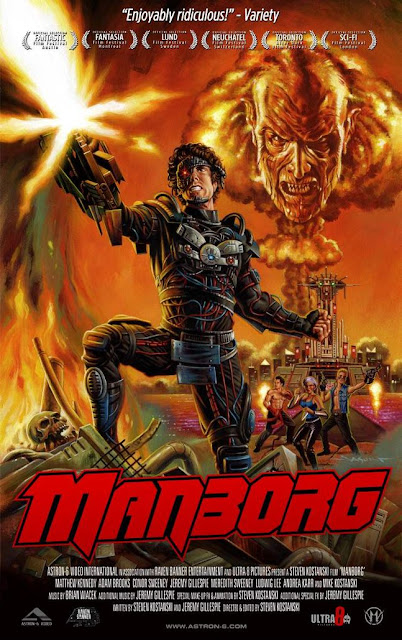 Director Steven Kostanski has invaded the internet with a glorious revival of twisted 80’s and 90’s cyber punk post apocalyptic future mayhem with a trailer for the April 30, 2013 home release of the award-winning 2011 science fiction action thriller, MANBORG!

Here is synopsis and a press release rundown of the film courtesy of Dread Central:

The forces of Hell have risen to the surface of the Earth to wreak unspeakable havoc on humanity, and it will take a real superhuman to save the world. Or at least Manborg – a spectacular creature of the future and the hero of MANBORG, the cult favorite sci-fi/fantasy homage coming to select theaters and DVD on April 30, 2013, from Dark Sky Films.

The armies of Hell have taken over the Earth, and all that stands in the way of the villainous Count Draculon and humanity’s total extinction is a motley crew of misfits led by the mighty Manborg: a warrior who’s half-man, half-machine but all hero. Once a young soldier killed during the first war against Hell, Manborg (Matthew Kennedy, Lazer Ghosts 2) reawakens in the future, rebuilt as a walking weapon and mankind’s last hope. Struggling to learn the secret of his origins, Manborg unwittingly befriends a post-apocalyptic Australian punker (Conor Sweeney, Heart of Karl), a knife-wielding vixen (Meredith Sweeney, Father’s Day), and a kung fu master (dubbed by Kyle Herbert of DRAGON BALL Z, STREET FIGHTER) before finally squaring off against Count Draculon (Adam Brooks, Father’s Day) in a desperate and bloody bid to take back the Earth.

Watch the trailer courtesy of Twitchfilm!