HIGH & LOW: THE WORST Review: An Exhilarating PSA That Graduates A Hit Saga 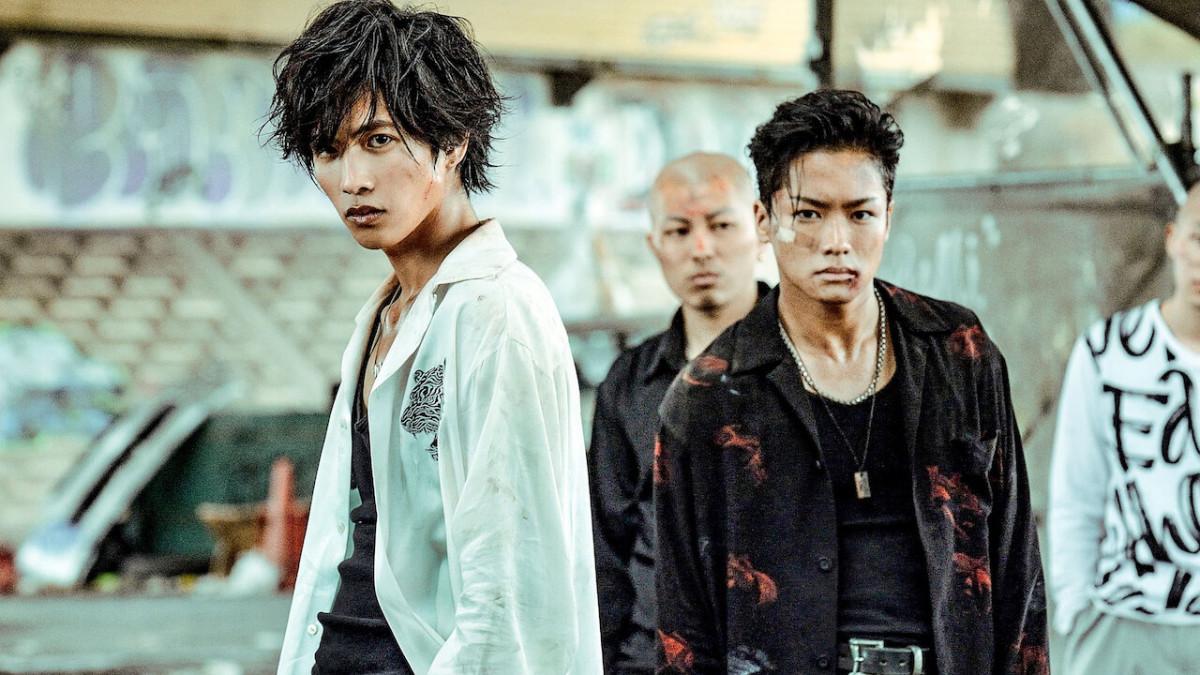 It was a little over a year ago that filmmaker Shigeaki Kubo and team HI-AX bookeneded the High & Low franchise following five years of major success on both the small and big screen; With the events of the first five films and three of the franchise’s supporting characters take the wheel for their own lighthearted adventure in the sixth, Kubo returns to form with High & Low: The Worst, invariably another action-packed and dramatic tale of childhood, crime and family, albeit toned with a keener anti-drug message that puts our delinquents at the forefront of a noble cause.

Alas, we revert back to the stomping, no holds barred grounds of S.W.O.R.D. faction, Oya High School, amidst the fallout between leader, Murayama (Yuki Yamada), and second in command Todoroki (Goki Maeda), over the involvement of full-time and part-time students in fights, leaving the school in a fractured state. Arriving just in time amid the disarray is Fujio (Kazuma Kawamura), joined by childhood friends and Oya classmates Tsukasa (Hokuto Yoshino) and Jamuo (Kohei Fukuyama) who welcome his transfer, and hardly into a minute on school grounds, Fujio’s formidable fighting skills are immediately tested by the school’s entropic classmates, making him largely a target for ire as a threat to the present hierarchy, including warring faction members Chunchun members Yasushi (Ryuji Sato) and Kiyoshi (Satoshi Uekiya), and Yasukiyo’s own Shibaman (Ryu) and Tsuji (Takahide Suzuki), all of whom grew up at together at the Hope Hill housing complex as Fujio.

Soon, Fujio discovers the illicit street drug, Redrum, being sold on school grounds, ensuing a meeting among all of Oya High led by Murayama who also learns of its current circulation in Toaru City, a territory just outside of S.W.O.R.D., where Housen Academy’s skin-headed, tough-as-nails “Murder Corps” reign supreme, led by Sachio (Jun Shison) and the four emperors Yuken (Akihisa Shiono), Shoji (Yo Aoi), Eimei (Shin Koyanagi) and Kenzo (Atsushi Arai). As Murayama mitigates his own personal life crises, both organizations decide to crackdown on its distribution, compelling Kidra – the parasidic drug-pushing gang who’ve since turned Hope Hill into a drug-fueled criminal outfit – to engage a mission of subterfuge to pit both Oya and Housen against each other. At the heart of this nefarious plot, however, are the young and desperate dealers peddling the drug, including Arata (Masato Yano), whose long broken friendship with Fujio and their former childhood sphere, could very well be the ultimate decider in whether or not they can stave off Redrum’s profuse decimation.

The introduction of Fujio and his circle of friends from their Hope Hill upbringing, namely Seiji, along with Madoka (Miu Tomita), and sibling construction workers, the Oochi. brothers Shinya (Yuta Nakatsuka) and Masaya (Hayato Komori), is what sets up the ensuing drama built around Arata’s departure, as the story progresses to explaining his role for the events, along with that of a young female student named Yui (Yumena Yanai), Sachio’s sister. These characters develop in equal parallel to what viewers observe in Murayama, who quietly finds himself at a precipice in life where he’ll have no choice but to mature and thrive like a normal adult in everyday society, much like many of his peers at Oya and throughout S.W.O.R.D.. That pressure also lends its weight with the much more behaved Seiji, as the one with the most scholarly promise among his Hope Hill bunch, which also serves ancillary when confronted by his school with the very norms and labels aimed at our protagonists.

Kubo and HI-AX do what they do best here with this series ender for the High & Low franchise, as they have done. With Kawamura leading the charge as Fujio for our story alongside Yoshino, the film’s Oya High setting lends a notable welcome back for actors Yamada and Maeda, having been with the franchise since the beginning, and hereto returning with a spectacular fight sequence to kick things off. Actor Shison proves just as badass in the role of Sachio, and for all intents and purposes, mirrors an equal measure to his counterpart in Fujio, much later in the film, and even Shinya and Masaya get in on the action. 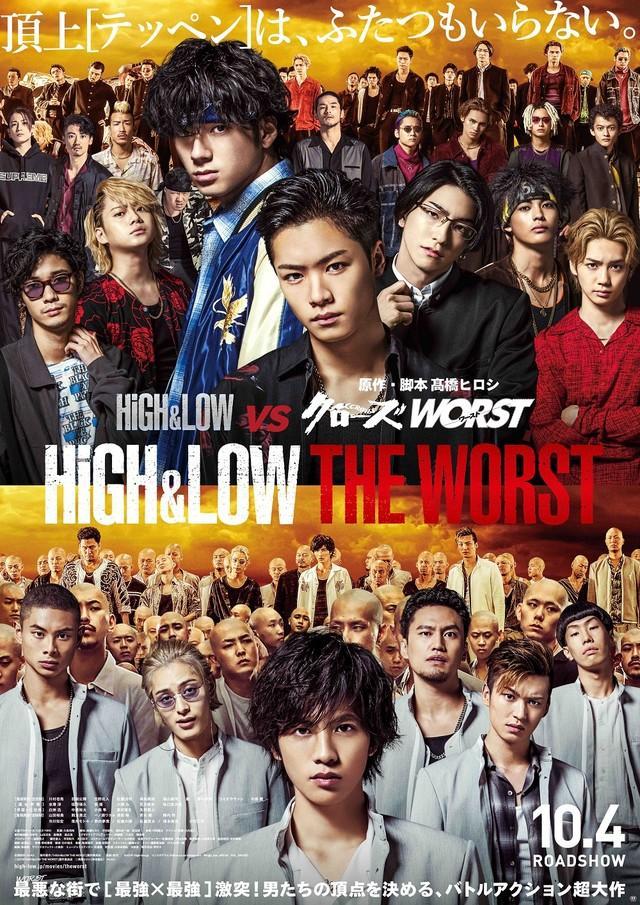 Not unlike some of its delinquent genre predecessors, Kubo resorts principally to characters who stipulate their politics solely on the use of dealing with their fists to solve their differences, a factor in seeing how the heroes of this story battle the odds when they’re confronted with characters who happen to be armed; You seldom see this among the S.W.O.R.D. roster, save for a few characters when they wanna make a statement without being too lethal (indeed there are sticks, broken bottles, chains and other random items that are fair game), and the most prevalent instance in the use of weapons is in High & Low: The Red Rain, where the Amamiya Brothers are forced to dodge gunfire from the Kuryu-led Kamizono group. And at the mild risk of delivering in excess, that’s exactly the legacy that makes a franchise like High & Low as admirable as it is, with High & Low: The Worst making good on its role in delivering the kind of gangbuster martial arts and street-brawler Crows-style action, and immersive, sweeping cinematography and lensing.

The bigger, more crucial element to the story is the two-fold drama that pertains to the Hope Hill characters; Arata is essentially what Noboru and Kohaku are to Cobra and Yamato in the High & Low canon, and so it feels like a revisit of a similar trope that still works here in its own way, as long as it emboldens the necessary sympathy toward the story’s progression. And secondly is the more pertinent anti-drug message that emantes in full regalia as our heroes engage in their final stand; That even wayward delinquents aren’t fallen by the wayside when it comes to morals may be imprudent for some and palpable for others, but there’s no question with regard to its usefulness in a story brimming with violence over some of its more feasibly ebullient characterization juxtaposed to the story arc between Fujio and Sachio, and even the hilarity of budding romance between Madoka and Shinya.

As time passes and the world continues to deal with the on-going pandemic, time will tell if there will be more to the High & Low franchise ahead. Undoubtedly, its easter egg tie-ins with The Worst to the Crows universe (aptly established in the live-action trilogy by Takashi Miike [2007-2009], and Toshiaki Toyada [2014]) has its appeal, albeit paired with cameo appearances by Tettsu (Kanta Sato) and Chiharu (Taiki Sato) – two-thirds of the DTC trio formerly of Sannoh Hoodlum Squad – and so it’ll be interesting to see if there’s still a future in what’s been one of the most thrilling and entertaining action movie properties to ever hit screens.

We have LDH Pictures and Japanese supergroup Exile Tribe to thank for this and all their efforts to flesh out its multi-talented cadre of singers and dancers to screenfighting form, on top of producing powerhouse songs to deliver it all in full. Rest assured, if the best is still yet to come, then High & Low: The Worst, makes for a good segway. The film is now streaming worldwide outside Japan on Netflix, and you can catch my reviews of all seven films by clicking here, and whatever you do, just make sure that you see all seven films in order. I hate repeating myself.

Images by Shochiku and Netflix