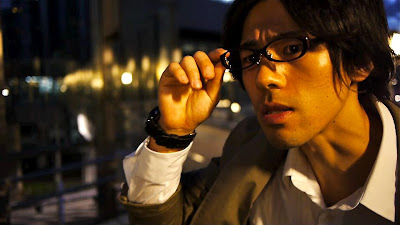 The future continued to look promising for Hiroshi Adachi, then, who left his home in Tokyo to attend San Francisco State University in 2008. It was then that he met and befriended the founder of The Stunt People, Eric Jacobus, setting off a chain of events that would allow Hiroshi to apply his 15 years of martial arts training to the field of independent action films in such projects as Ness, Graduation, Hand Over Fist, and the feature film, Detective Story which is currently available on DVD at the Stunt People Store.

Adachi-san recently hit the internet once again, co-starring with friend and rising actor Shogo Moriyama for a new shortfilm hot off of Hiroshi’s Youtube channel, Showdown. The film is an experimental take on Bourne-style choreographical vision of action by stunt coordinators like Jeff Imada, Jeff Ward, Oliver Schneider, David Forman and Ron Balicki. This type of choreography has been experimented with before, with filmmakers like Emmanuel Manzares of LBP Stunts Chicago with such clips as Identity, Supremacy and Ultimatum, and as recently as last month with indie action filmmaker Eric Nguyen’s 10 minute short, Fahrenheit. It works very well on film given the right technique, the speed of execution and timing, in addition to the right use of camerawork. Just a few films out there have failed in this particular department, but it is very cool to see this style of action help evolve the area of choreography for a new age of inspired action directors.

Granted, hopefully America will see a little more from the Land Of The Rising Sun in the days ahead as Hiroshi hopes to work again with Eric, as well as the guys at LBP Stunts and other action crews who share the same goals as he does. In the meantime, subscribe to Hiroshi’s YouTube channel and check out the clip.

Joe Taslim's Breaks Out The Big Moves In 2013 The Latest On Upcoming Film, LADY BLOODSPORT