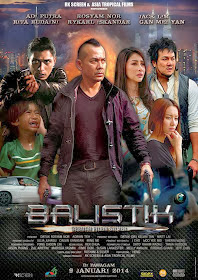 Actor Rosyam Nor‘s next film is going to be a romantic feature, but not before he brings out the ‘splosions in his latest role for director Silver’s upcoming Malay language action drama, Balistik. The film sees reunites KL Gangster 2 co-stars, lead actors Nor and Ady Putra, and actress Rita Rudaini in a Hong Kong-action infused story that pits two former childhood friends who are now enemies on opposite sides of the law with a woman and child caught in the middle.

In a recent interview with The Sun Daily, Nor talked about his career, life as an action star at his age and the differences between the Malay, Bollywood and Hollywood film industries. He also spoke of what viewers can expect from Balistik next year, stating “Love, tears and lots of action,” and also expressed what he envisioned when he brought Ng Lai Huat on board to design the action sequences, saying “I wanted the stunt scenes in this movie to look different from other Malay movies.”

Balistik releases domestically on January 9, 2014 with Jack Lim, Gan Mei Yan, Raikal, Tania Hudson, Jason Phang, Marissa Yasmin, Dato Rahim Razali, Susan Lankester and Jeff Chin rounding out the cast. A teaser went viral a few weeks ago, which you can check out below in addition to the full trailer for the film.
SYNOPSIS:

“Balistik” tells the story of Saga, a hired killer and mafia gang member. His high risk life forces Saga’s wife Salina to leave him and their son. After six years, while on a mission, Saga crosses paths with Salina, but she is now the wife of Inspector Nizam, who was Saga’s best friend while they were in the orphanage. Torn between his best friend and his duty to the law, Inspector Nizam has to decide whether to pursue Saga, while Saga is ordered by his leader to kill any law enforcement officer on their trail…