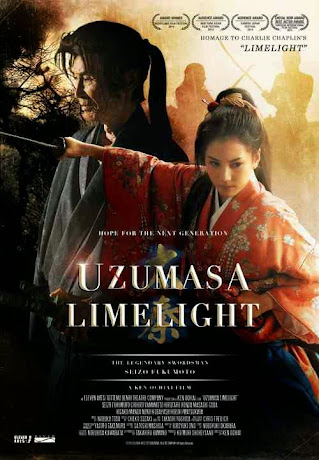 Actor and seasoned stuntman Fukumoto Seizo has been the recipient of much-deserved popularity as of late following his acting debut in Ochiai Ken‘s new film, Uzumasa Limelight. While delivering its fair share of suitable swordplay action and drama, Ochiai‘s award-winning film festival favorite of 2014 serves largely as a poignant character study bearing virtually much more similarity to that of its lead actor, and not for nothing. Fukumoto has spent close to 80% of his life in the world of film, leaving an otherwise unchallenged legacy as one of the hardest working performance artists in his field.

The film is still running its festival course with a screening gearing up for the Philidelphia Asian American Film & Filmmakers Film Festival on November 14. Thankfully though, the good-natured folks over at Eleven Arts have the film in their custody and will be granting the film a limited North American theatrical release on December 5, and here to accompany the date is a newly refurbished trailer to watch beneath the press release.

With a successful Japanese release, and as well as a recipient of several awards at film festivals across the world, UZUMASA LIMELIGHT will be making its way stateside for its US theatrical run. The latest keyart and trailer can be viewed online on the film’s official website: www.uzumasalimelight.com.

The release kicks off with the Los Angeles red carpet premiere in Beverly Hills on November 24, with director Ken Ochiai and stars Seizo Fukumoto and Chihiro Yamamoto in attendance. The official U.S. release date is set for December 5, starting in several cities, including Los Angeles, Irvine, New York City, Honolulu, and Aiea. An expansive list of theaters throughout the United States is available at www.uzumasalimelight.com.

Uzumasa has been called the Hollywood of Japan. Located in the historical Kyoto Prefecture, known as the cultural center of the nation, it has produced many “jidaigeki,” Japanese period films which are set in or before the Edo period (up to 1868 AD). These films are loved by the Japanese people and praised all over the world, but would not be what they were if it weren’t for the “kirareyaku,” actors whose job it is to be killed by the lead star, without ever being in the limelight.

Uzumasa Limelight is about those men, the unsung heroes of classic jidaigeki films; Actors who loved and respected the art, even when the production of classic jidaigeki films began to dwindle. Staring the legendary Seizo Fukumoto, Japan’s most famous kirareyaku who appeared as the “Silent Samurai” in the 2003 Hollywood film The Last Samurai, and using Charlie Chaplin’s Limelight as an underlying theme, the admirable story of these men dealing with a new generation and fading craftsmanship is told with melancholy and soul.

Charlie Hunnam In Training For Thai Prison Fight Drama, A PRAYER BEFORE DAWN The New Shortfilm Teaser For YAKUZAMBIE Pits A Mob Princess And Her Sex Slave Against The Undead!