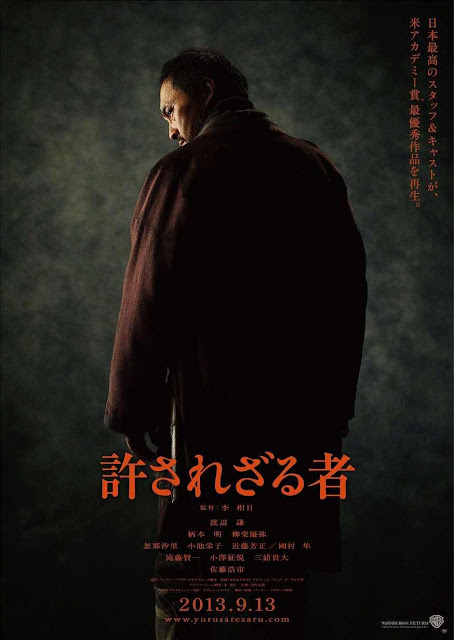 I have always enjoyed Ken Watanabe‘s film performances ever since he starred in The Last Samurai with Tom Cruise back in 2003. Since then, I’ve been fascinated by the possibilities of roles he could play in future Hollywood productions. That said, fans of Japanese cinema may want to catch on to his latest film, Yurusarezaru Mono, directed by Sang Il-Lee.

The film is a remake of the 1992 award-winning western picture, Unforgiven, which starred and was directed by Clint Eastwood, along with Morgan Freeman, Gene Hackman and Richard Harris co-starring. And while Sang’s 2013 remake looks more dramatic than anything, the film is said to be a jidaigeki samurai re-imagining. It sounds and looks pretty bold, and I can’t wait to see it.

Sang Il-Lee film the movie late last year with star Ken Watanabe in the lead role, along with Yuga Yagira, Koichi Sato and Jun Kunimura. The film will be released in Japan on September 13, 2013.

The story is set in Hokkaido in 1880, a time of increased pioneering in the area after the fall of the Tokugawa shogunate. Ken Watanabe stars as a long-retired samurai named Jubee Kamata who is now living a quiet secluded life with his children.

Jubee was once a famous assassin in Kyoto who killed at the behest of the Edo government. After the decisive Battle of Hakodate, he slipped away and fled to the north to escape the new government. Ten years ago, he gave up his sword for his late wife, but poverty causes him to be lured out of retirement by a particularly large bounty.

Click HERE to view the previous teaser from last year. Then check out the latest teaser in the embed below, courtesy of Twitchfilm.

Juan Manuel Olmedo Is Sworn To Vengeance In The Second Teaser For JUSTICIA PROPIA Awkward Table Talk, Some Jaw Dragging, And A Hot Skillet To The Face In New Clips For ONLY GOD FORGIVES