LEAFF 2016 Peddles Forward With A Mini-Festival This Month! 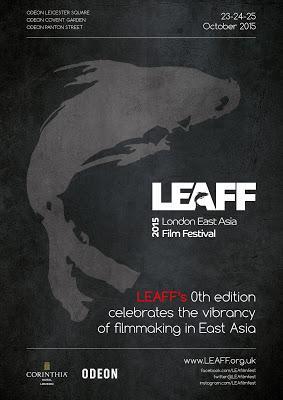 Director Ryoo Seung-Wan’s Veteran drew huge approval this year, and with much praise and delight ahead of sequel news with said director. Just as equally for the movie crowd in the UK, the film will also be headlining as the opener for this month’s pre-launch ceremony for next year’s premiere installment of LEAFF (London East Asia Film Festival).

Tickets for the pre-launch are now available with more info at the official LEAFF website. For this, host to a slew of info is their latest press release for the pre-launch which kicks off its three-day event on October 23, and there are only a handful of films, but it’s a tasty selection attendees will surely approve.

The years 2016 and beyond will see bigger programmes with a wide range of quality cinema: films for general audiences, the latest in stylish hits from horror and action genres, and a carefully curated selection of titles drawn from the region. Presenting these films as UK, international and European premieres, LEAFF gives audiences the chance to become acquainted with national cinemas that currently get little exposure in the west.

An annual festival, LEAFF will showcase East Asian filmmaking from both emerging and established directors and will give audiences the chance to interact with directors and stars.

Mrs Hye-Jung Jeon, Director of The London East Asia Film Festival commented “The London East Asia Film Festival aims to introduce Asian films that directs the audience to really understand the culture. It will focus on the filmmakers’ perspective through conversations and not simply show Asian cinema that is a variation from European films. Also, this festival can achieve greater communication with the audience than festivals dedicated to a single country. I hope the people of London discover the distinction and individuality between different countries within East Asia.”

Mr Chris Fujiwara, Chief programmer said: “Around the world, Asian film festivals attract audiences in ever greater numbers, proving the excitement and enthusiasm that surround the films, the heritage, and the contemporary cultures of East and Southeast Asia. I look forward to welcoming the UK public on what promises to be a continuously unfolding and unpredictable cinematic adventure.”