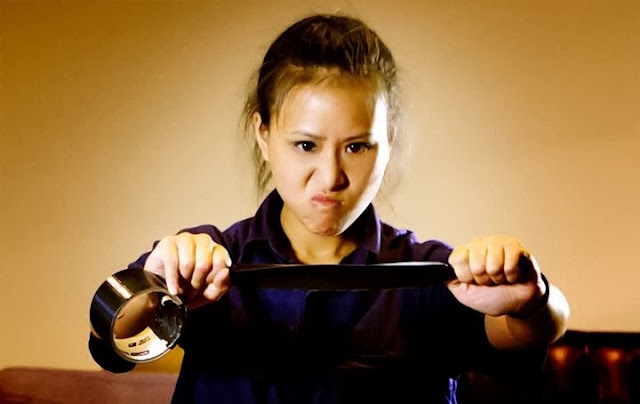 At some point or another, we all have had, or have that one idiot we’re forced to get along with at the office. In this case, it’s two balloon factor sweatshop workers who can’t stand each other, and get caught up in an epic old school kung fu brawl, loaded with comedy, high jinx, and lots, and lots, and LOTS of tape.

Directed by Adrian Chino Castro and Craig Anderson who also produced, edited and co-starred as the heavily bearded boss, Gaffa stars Aussie actress and action star Maria Tran and actor Andy Minh Trieu. The film was shot in December 2012 with fight choreographer Trung Ly, and eventually made its way through the film festival circuit, which is familiar territory for Castro and Tran hot off of winning awards for their work on the crowd-funded Girls With Guns action comedy, Hit Girls, which also starred actress Juju Chan.
Tran and Chan will also be starring in the upcoming early 2014 release of Fist Of The Dragon, from producer Roger Corman and director Antony Szeto. Tran is also aiding in the production of the new upcoming post apocalyptic sci-fi action webseries, Hidden Peaks, in addition to gearing up for the production of a new fully-financed kung fu comedy TV series for ABC titled Maximum Choppage, inspired by a 2008 indie feature that Tran worked on.
Stay tuned for more info. In the meantime, Gaffa is now available on Maria Tran‘s official YouTube channel, which you can subscribe to in the embed below.