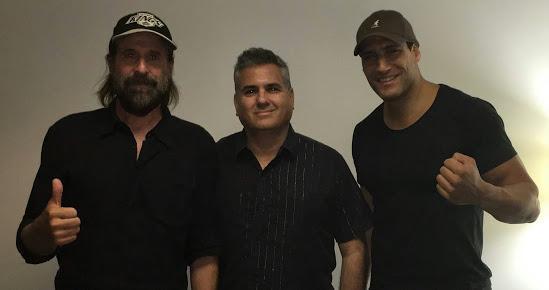 It was a little under three weeks ago that Time Rush and Asian Connection helmer Daniel Zirilli shared the above picture annoucing a new project in development for a Bangkok-bound shoot. Details are still pending but reports over at Screen Anarchy have otherwise confirmed an official start date and story info with action star Marko Zaror back in his first solo vehicle since El Redentor in 2014.

Bruno Leone, a former Navy SEAL, has his new solitary life in Southeast Asia interrupted when a mysterious girl washes ashore. Athena, reluctant to share the details of her past, develops a relationship of hope with Bruno. Their world is sent crashing down when Athena is taken captive (on a remote Island in the Andaman sea) by Dr. Vitor Strozzi, Commander Krieger, and a team of elite commandos. Determined to get Athena back, Bruno wages a one man war to rescue her and uncover a shocking truth about Athena that will shake him to his core.

Zaror is joined by Peter Stormare who will play “Dr. Vitor Strozzi”, while casting for Krieger and Athena remain pending. Zirilli and Zaror provide the story with Christopher Don scripting as Zirili producing via his Pop Art Films banner.

The Chilean marital arts film star is currently part of the season three line-up of El Rey Network’s From Dusk Til Dawn: The Series – Season 3 which is now airing, in addition to Ali Abbas Zafar’s latest MMA drama, Sultan, starring Zaror opposite lead star Salman Khan and is available on Digital HD and VoD wherever movies are sold.

Zaror’s other current film prospects include Jesse Johnson’s Savage Dog and Michael D. Olmos’s The Green Ghost, both in production, while we await further notice on the possible revival of Headshot co-director Kimo Stamboel’s upcoming debut at the helm, One Good Thing, following announcements in 2012, and whatever lies ahead for Riccardo Gabrielli R’s Columbian superhero property, Zambo Dende.