MERCURY RISING: An Evening With Actor And Stuntman Shayan Safar 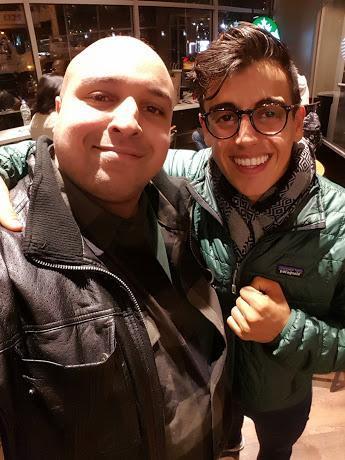 I’ve never really pondered the affect I might have as a blogger on people that I’ve been writing about in the past three years, and primarily because I’m just busy writing. I get mostly good responses from people in the stunt and film industry apart from some of the more less-than enthused ones (yes, those exist), and they’re all nice to hear in the course of my own growth, though for me there will always be a room for improvement. I thought about this and a bunch of other things as I shared reflections over some beverages at Starbucks at Columbus Circle with stuntman and actor Shayan Safar who was in New York City for a job interview unrelated to stuntwork.
I’ve been covering Safar since early 2015 when I shared his first stunt reel online, and he told me how jubilant he was when he saw his demo being posted on a blog for the first time since he began training in stunts nearly four years ago. Safar was born and bred in California from Iranian immigrant parents and grew up in an astute family – his mother: a scientist, his father: a physcian and brother: a lawyer. Safar graduated from UCLA with B.A. in Psychology and is also a current candidate to get a Doctorate Degree in Physical Therapy, which is amazing since it’s not everyday you meet someone as academically inclined with an occupation in the field of something as dynamic and bold as stuntwork. Frankly though, I’m very certain there are more people like Safar who are apt in such fields; I know a martial artist and stuntwoman named Bridger Fox who can literally science the fuck out of a conversation about insects and chemicals and she does it so effortlessly! I’d listen to her outline in detail how to serve a glass of water if it meant using the world’s biggest words to do it, just for fun!
Anyway, Safar and I had a terrific time on Sunday evening. We got to Starbucks pretty earlier than expected considering normally trains run local on Sundays and funny enough, mine was running express, so I was pretty fortunate. Most surprising and rather refreshing was Safar’s own appreciation for me and my writing as it’s not often that I get feedback about my work. In fact, he was actually interviewing me for maybe the first ten or so minutes while we waited for seats before I inquired about him and upbringing. Apparently he’s also a natural on the dancefloor since he was an aspiring b-boy, though in lieu of bigger challenges he eventually started training in stunts wherein he became familiar with folks like actor, martial artist and shabyvideos YouTube channel founder Shahaub Roudbari, and a number of today’s prime Hollywood stunt performers who train at 87Eleven as well as Joining All Movement.
His biggest goal, right now, is to get in touch with actor Rami Malek, star of the hit USA Network series, Mr. Robot and the recently announced frontman to play Freddie Mercury for the upcoming Queen biopic, Bohemian Rhapsody from GK Films. He’s often mistaken for the actor and clearly Safar’s resemblance to Malek should serve him well as a suitable stunt double on any project… even if it means hours of watching Queen videos until production, I reckon.
Safar and I had great levity and I’m certain we could have probably talked longer had we not been limited to just a few hours that evening. He shared a few pictures from when he did stunts on the Nickelodeon series, The Thundermans, and we also talked about some of the work he’s done so far with Roudbari and filmmaker Kevin Tsai and their approach to fight choreography and timing (see The Unforgettable and Relentless). We also cut loose and joked heavily about daytime professions and angst, as we have both worked in retail (and if you’ve worked in retail, the mention of it is self explanatory), and we also discussed our own respective futures.
One of Safar’s biggest hopes, apart from networking with New York City’s stunt community, is that I get to head out to California to be closer to the stunt community at large, or if only for a brief period of time just to meet a few more people in that process. From what he’s told me, he’s not alone, and it satisfies me greatly to receive such warm praise from people miles and miles away for what I’m doing. I’m also steadfast in my own conscientious efforts to keep going, to grow and change fruitfully and flexibly, and inspire a platform of expression for my contributors – some of whom work in film and aspire to be film professionals themselves. In that regard, I certainly look forward to Safar writing a guest piece about his experiences in film, stunts and life in general at Film Combat Syndicate if he ever gets the writing bug. I think in due time he’ll have a great story to tell.

To my friends out in the world, including our dear mutual friend Cassie Lee Minick and the rest within Safar’s shared circles…I love every single damn one of you. Thank you, and to too, Shayan, for your continued support of Film Combat Syndicate, the hot chocolate, the laughter and the piling stack of some of the best memories I’ve ever had in my life. Also, if it’s not too much trouble, give Malek my regards!…Yes, I am envisioning it! It deserves to happen!