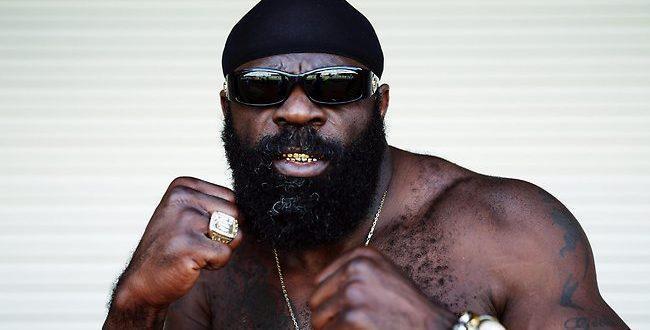 2016 took away a lot of celebrity favorites and there’s no question that famed backyard brawler-turned-MMA star Kimbo Slice (a.k.a. Kevin Ferguson) certainly left an impression of his own on the fighting sports circuit before passing away in June of last year at 42. Thus, one can only count the months and weeks before enough time has passed for rumblings of a biopic based on his life story.

As Deadline’s exclusive on Tuesday has it, one such film, Kimbo, is now in development with Simon Brand (Default, Paraiso Travel) set to direct. Bee Holder Productions’ Steve Lee Jones is producing next to WeBros Entertainment’s own Michael and Andy Weiss, the latter whose script will set the film inspired by the late Bahamian-born street fighter who rose from homelessness to internet fame and ultimately professional fighting success.
Apart from winning in the ring, Slice also faced ailments dealing with high blood pressure and even took medication. His last fight was a win against Dhafir “Dada 5000” Harris at Bellator 149 in Houston.
Slice himself also shares several screen credits in film, most notably Ben Ramsey’s 2009 martial arts hit, Blood And Bone starring Michael Jai White and Roel Reine’s The Scorpion King 3: Battle For Redemption.

“Those who only knew Kimbo by viewing his brawls saw him as fierce and frightening beast of a man, but those close to him experienced his heart of gold, and that he used his fists and instruments to raise his family out of poverty, he was a loyal friend and devoted father”, says Brand, “Kimbo’s story transcends the ring, it is a story about the power of the internet, the lengths one will go to break out of desperation and it is a success story shared with his longtime friend turned manager and adult entertainment magnate Michael Imber as they both emerge from the slums of Miami.”

Executive producing is Camila Castro of Bee Holder along with Michael Imber, Eric Weider, Scott Barlow and Rick Dukhovny.
As for who would star, I’m suddenly reminded of a recent Facebook video by comedian Ryan Davis. I laughed because his points are true. Still, I wonder who will get the part. It’ll be interesting to see.