NEKOSHIN: A Ninja And A Cat Spark A Unique Bond In The First Teaser 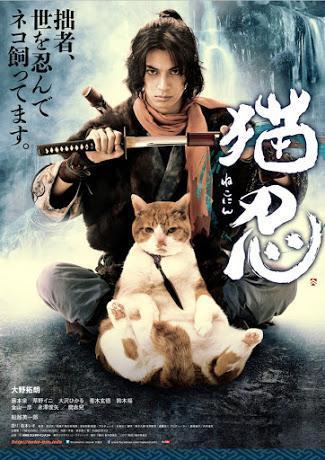 Happy New Year everyone! And lo and behold, the first post I’m doing lends a nod to Higanjima Deluxe helmer Watanabe Takeshi following his acclaimed work on tvk’s Neko Zamurai (Samurai Cat) series, and the films – both which become the delight of many a festival and filmgoer. Thus, we now get a peek at Sailor Suit And Machine Gun: Graduation co-star, actor Ohno Takuro leading the next phase, Nekoshin.

Young ninja Kagerota of the Kiryu family was separated from his father when he was 10 and has lived without knowing love. His father is the legendary ninja, Kenzan. One day, Kagerota goes to Edo on a mission with fellow ninjas. It is a simple mission to steal special goldfishes from the residence of a feudal lord. They successfully get into the place and are about to steal the gold fishes when they sense something by the side. It is a fat cat with a red nose. There is something about the familiar cat that bears resemblance to his father…

I reckon a good idiomatic translation for the title would be “Ninja Cat” or something; Of course my Japanese is nil, although those of you fluent enough will find some cool behind-the-scenes footage for this latest endeavor as well as some other cool bits at the official website.
The first teaser arrived in recent weeks with a look and tone that amply appeals to its predecessors. The tvk series Nekoshin is based on will air later this month, while the film opens on May 20.

Cambodian Martial Arts Romp, JAILBREAK, Traps You Behind Enemy Lines In The Official Trailer! Could Actress And Martial Artist Sarah Chang Be Disney’s Next MULAN?