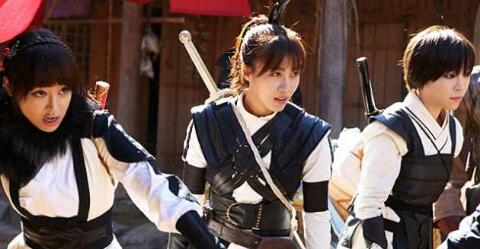 The film is described as a cross between Charlie’s Angels and The Three Musketeers with an Asian period twist, with characters the director described as styled to fit traits emulated by action cinema icons Bruce Lee, Jackie Chan and Jet Li. Filming lasted three months in the city of Cheongju-si, South Korea, beginning in August and wrapping filming in December of last year. You can view some behind the scenes photos by clicking HERE.

The main focus of the story places three girls who are taken under the wing of a master who trains them to become the Joseon Dynasty’s best and most killed bounty hunters ten years later. The Huntresses also stars Joo Sang-wook and Go Chang-seok. The film is expected to release in May.

As a child, Jin-ok witnessed the murder of her father and narrowly escaped death. She is taken under the wing of Mu-myeong, the man who saved her life, and trains in martial arts alongside two other girls. 10 years pass and the girls are now Joseon’s best bounty hunters. One day, Jin-ok is asked to take on a case for a handsome reward. Against their master’s wishes, the trio takes on the job, not knowing it will eventually lead them to the man responsible for the death of Jin-ok’s father 10 years before.

Get Ready For The LEGENDS OF THE MARTIAL ARTS Mega Weekend In PA This May! Koichi Sakamoto’s Sexy Sci-Fi Action Thriller, TRAVELERS: DIMENSION POLICE Coming In April!