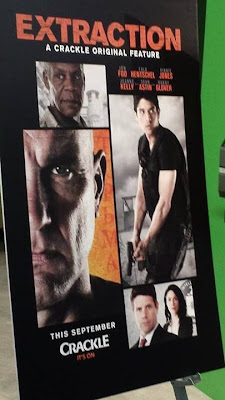 We have a new trailer for the upcoming contained action thriller Extraction. The film is part of a new slate of action movies and web shows set to premiere this fall only on Crackle.com, as per an announcement from the network made at a star-studded conference hosted by NewFronts in New York City earlier this year.

The film stars Jon Foo, back in the limelight and back in action in his latest lead role since the martial arts thrillers, Tekken (2011) and Bangkok Revenge (2012). Joining him is actor Falk Hentschel, best known for his role as the train assassin in the James Mangold-directed romantic action comedy adventure, Knight And Day with Tom Cruise. Rounding out the cast of the film are Danny Glover, Sean Astin, Vinnie Jones and Joanne Kelly, and will be the first feature film to premiere on Crackle.com on September 5, 2013.
Watch the trailer below. The clip that follows comes courtesy of ShockYa‘s July 5 article.
SYNOPSIS:

A major feature exclusively for digital, EXTRACTION follows a U.S. Black Ops team member who finds himself the only survivor of a botched prisoner extraction mission. Forced to fight his way out of a maximum-security Chechen prison, he must keep his target alive in order to catch a terrorist arms-dealer who is a threat to thousands of lives.

You can purchase the official poster, which debut at this year’s San Diego Comic Con by clicking HERE.

KICK-ASS 2 Locks And Loads With A New Red-Band Featurette! Scott Adkins And Wu Jing On The Set Of WARG