ONCE UPON A TIME IN SHANGHAI: A Renewed Kung Fu Tale With A New Face For Kung Fu Fans 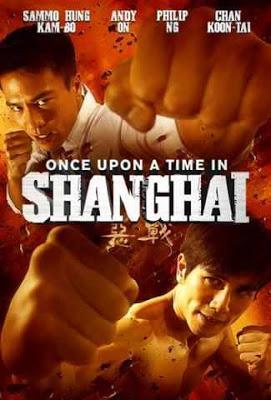 Actor Philip Ng is currently bound for what’s sure to be a breakout role as the legendary marital artist and film star, Bruce Lee in director George Nolfi’s new film, Birth Of The Dragon. In the meantime, Ng has definitely left an impression on fans of the martial arts genre with a career in which he’s worn several hats, including the stunt department. It’s a career that otherwise lined-up a very opportune moment for Ng in the role of the classic Chinese hero, Ma Yongzhen in director Wong Ching-Po’s 2014 film, Once Upon A Time In Shanghai.

Ng takes up the role as portrayed in at least two other film adaptations in the last four decades – a gifted martial artist who migrates to the bustling city of Shanghai in the 1930’s where he eventually finds himself in the throes of a notorious gangster Long Qi, played by martial arts star Andy On. With Opium as the biggest commodity on the black market and Long Qi staking his claim, politics within the Axe Fraternity and its main leaders force their hand with no choice but to find a way to get rid of him or lose their stronghold over Shanghai entirely.

Meanwhile, Ma and his cohorts struggle to find work whilst keeping his promise to restrain his deadly fighting prowess, a promise symbolized by the mother’s jade bracelet on his right fist. However, as Ma decides to use his newfound friendship with Long to help provide jobs for his friends and even impress a girl in  their slum named Tie Ju, played by Michelle Hu, her father, Master Tie, played by action legend Sammo Hung, warns him of what could happen if he gets involved with Long Qi. Nonetheless, it’s already too late as the Axe fraternity gang leaders take initiative in collusion with the Japanese, raiding Ma’s slum and its villagers and seizing Long Qi’s club. With Ma left as one of the only few standing, he wages a one-man war against the Axe-gang and its leaders.
While Once Upon A Time In Shanghai is not without its share of ire over remakes, it does carry some redeeming qualities, including the action. Both Ng and On work greatly together in their respective roles displaying the bilateral nature of their friendship in the story, which also leaves plenty of screentime to showcase their fighting prowess as equal opposites. Here in addition to the drama, veteran action stalwarts and actors Fung Hak-On, action choreographer Yuen Cheung-Yan and actor Chen Kuen-Tai – preceding star of the original 1972 film, The Boxer From Shangtung also lend to the film’s meaty action performances directed by Yuen Woo-Ping.
Tonally, the film’s setting offers an otherwise refreshing take with a slight Film noir approach to its scenery whether its on the lit streets of Shanghai or in its dark and dirty alleys, and the music contributes greatly to a few of the film’s subtle moments. Unfortunately though, a lot of these positives don’t make up for some of the minor character developement, and so what you’re left with in certain areas are scenes meant to be simply suggestive.

Hung and actress and martial artist Jiang Luxia manage to get some screentime of their own albeit more vicariously than preferred and with specific regard for the latter, and I blame Wong Jing’s script for that one. Michelle Hu offers plenty in support of Ng’s character as their relationship slowly grows and develops from silly angst to something slightly substantive and mature by the end when all the blood is spilled.

Some may see Once Upon A Time In Shanghai as somewhat boring, pretentious and unceremonious, and/or even as mere spectacle, and they would only be partly right in that regard depending on which terminology. The film is pretty rough around certain edges and probably does comes up short in areas where aesthetics may factor in, but you be the judge.
For all that Once Upon A Time In Shanghai could have been, it still works in its own little way. It’s a ripe period action drama with a mixed roster of action talent which speaks highly of the generational unison among film professionals young and old, led by a promising lead actor ripe for greater prospects.

YOU CAN'T HEAR ME, YOU CAN'T SEE ME, But You Can Do Both With A Ten Second Teaser Clip From The New Action Short! CREED: Still A 'Rocky' Movie, But Packs A Punch All Its Own