There is a war of canons being taken advantage of on the new Star Trek movie and it’s not pretty. It deals specifically with co-writer Simon Pegg re-introducing a beloved character, Hikaru Sulu, to us as gay. Sadly, it infringes upon the well-established canon that the late Gene Roddenberry took seriously. To add insult to injury, Pegg says he “respectfully disagrees” with actor George Takei‘s recent comments, the original actor who portrayed Hikaru Sulu, about how Gene envisioned him as straight. Takei came out publicly as gay in 2005.

Later in life while producing Star Trek: The Next Generation, Mr. Roddenberry thought it was time to introduce a gay character. It didn’t happen because of Rick Berman and Mr. Roddenberry’s lawyer, both allegedly homophobes. Writer David Gerrold describes personal and professional events here on that issue.

Takei was disappointed to learn that Star Trek: Beyond writers Simon Pegg and Doug Jung made this decision (and supported by the current Sulu, John Cho and new Spock, actor Zachary Quinto) and rightfully so. Why not fiddle around with the other characters too? Let’s make Scotty transgender, Bones as bi-sexual, and Dr. Carol Marcus a lesbian. Besides, it’s an alternate universe! The timeline got messed up by Romulan Commander Nero and an old Ambassador Spock trying to make things right in Star Trek (2009). But were we already up in arms over a young Nyota Uhura (Zoe Saldana) kissing and even hugging Spock (Zachary Quinto) in one scene? Cue the crickets.

According to the alternate canon, the Uhura/Spock relationship is there but not entirely explained to my satisfaction. It’s a forced acceptance but what was going through the minds of writers Roberto Orci and Alex Kurtzman?

The inspiration for this came from the original series, where apparently there are scenes of these two flirting […] Since the rough-and-tumble badboy is always the one to get the girl, the writers wanted to pair Uhura up with the less obvious choice. Besides, since Uhura is a smart, mature woman, they felt that she would probably gravitate towards the more interesting, intellectually mature man. (H/T: Darth Mojo)

The writers also explain that although hints about a relationship between them were included in the movie, the scene in the turbolift “felt like it would be the best access point to reveal that to the audience.” and “the reveal that they have been together comes hopefully organically in a moment where Spock is suffering”.

Even the original Uhura, actress Nichelle Nichols weighed in on this and expressed on more than one occasion that the romance in the movie version works because in the original series there were hints of attraction between the characters but a relationship could never develop between them due to the time (60s) where and when the show was originally made. In 2008 (before the 2009 movie came out) she said that she always thought that Spock was the person Uhura was the closest to on the ship. In an interview from 2009 she talks about the origins of her character and how she created Uhura as a feminine but human version of Spock. She also confirms that Gene Roddenberry himself had intended to develop a relationship between the characters had the show gone past the third season but was cancelled by NBC.

“I decided then from the character that I read [Spock] that I wanted to be very much like that character but in a feminine way. And Gene said, and I was sharing this with George (Takei), you could have never had a love scene in 63 between Uhura and Spock but there were several hints and [back to Roddenberry] Gene was one in the kind of beginning to follow that and he wanted to do episodes if we had gone past the third year.” (H/T: Fanlore)

However, this was about two established hetereosexual characters that was never explored in the television series. We’re talking specifically about a character who was regarded as straight and now is gay. But let’s hear why George Takei wants Hikaru Sulu to remain hetereosexual: “I’m delighted that there’s a gay character,” he tells The Hollywood Reporter. “Unfortunately, it’s a twisting of Gene’s creation, to which he put in so much thought. I think it’s really unfortunate.”

And that creation was essential to Gene Roddenberry as the character’s name was based on the Sulu Sea off the coast of the Philippines, wanting to make the Asian leanings indeterminate. And to portray him as heterosexual. But Pegg is having none of it.

In a statement released to The Guardian on Friday, 8 July: “I have huge love and respect for George Takei, his heart, courage and humour are an inspiration,” he wrote. “However, with regards to his thoughts on our Sulu, I must respectfully disagree with him.”

Pegg expressed sympathy with Takei’s sentiment that mainstream gay heroes were belatedly coming to the big screen, but rejected the idea that this meant a new character needed creating.

“He’s right, it is unfortunate, it’s unfortunate that the screen version of the most inclusive, tolerant universe in science fiction hasn’t featured an LGBT character until now. We could have introduced a new gay character, but he or she would have been primarily defined by their sexuality, seen as the ‘gay character’, rather than simply for who they are, and isn’t that tokenism?”

My informed opinion says this is a cop-out.

“Justin Lin, Doug Jung and I loved the idea of it being someone we already knew because the audience have a pre-existing opinion of that character as a human being, unaffected by any prejudice. Their sexual orientation is just one of many personal aspects, not the defining characteristic. Also, the audience would infer that there has been an LGBT presence in the Trek Universe from the beginning (at least in the Kelvin timeline), that a gay hero isn’t something new or strange. It’s also important to note that at no point do we suggest that our Sulu was ever closeted, why would he need to be?  It’s just hasn’t come up before.”

Pegg digs his own grave with the above words. And is very disingenuous as the episode “Shore Leave” briefly shows a smiling Sulu to an attractive girl who sides up to him. Is Pegg trying to fool us? Or does he not realize his own bullshit is just that? His changing the very nature of Hikaru Sulu that Gene Roddenberry created is a disservice to Trekdom and lazy writing. And the new Spock, Zachary Quinto, who is openly gay, supports Pegg. He tells Pedestrian.TV:

“Any member of the LGBT community that takes issue with the normalised and positive portrayal of members of our community in Hollywood and in mainstream blockbuster cinema… I get it that he has had his own personal journey and has his own personal relationship with this character but, you know, as we established in the first Star Trek film in 2009, we’ve created an alternate universe.

“My hope is that eventually George can be strengthened by the enormously positive response from especially young people, who are heartened by and inspired by this really tasteful and beautiful portrayal of something that I think is gaining acceptance and inclusion in our societies across the world, and should be.”

However, Quinto’s reasoning, even Pegg’s, is highly illogical. The events they describe in this “alternate” reality takes place in the year 2264 but that invalidates Demora’s birth from 2271, according to the Memory Alpha site. Why is she being born at an earlier date? It’s just yet another misstep by people taking liberties with the Trek universe at the expense of having one major character gay. Isn’t that in and of itself, tokenism?

Star Trek (2009) movie events first take place in the year 2233 when a Federation starship, the USS Kelvin, investigates a “lightning storm” in space, which the crew soon realizes is a black hole. A massive vessel, the Narada, emerges, creating an alternate timeline from that point. How does that affect Hikaru Sulu’s sexuality? None. And so many plot holes, bad science, product placements (Nokia, Budweiser come to mind and the God-awful Beastie Boys ‘Sabotage’), clichés, the Kobayahi Maru re-write, and Quinto’s too-emotionally-charged Spock damage the film.

Twenty five years later, in 2258, we resume events from the movie until it’s end. A 25 year plot hole when Old Spock appears. That means by 2259, Kirk becomes Captain of the Enterprise. And Kirk going from Cadet to Captain in this is just too beyond the pale to comprehend. So many inconsistencies border on the insane as Abrams, Orci, and Kurtzman warp Star Trek history to their own terrible view.

Star Trek: Into Darkness (2013) movie events take place in 2260. Too many plot holes to mention here and even J.J. Abrams admits there are too many issues to ignore. However, playing with the timelines of the characters especially Khan Noonian Singh (Benedict Cumberbatch) dampens this thoroughly uncomfortable film where everyone seems to be grandstanding to some degree except for the ladies who appear to be useless apart from Carol Marcus saving Dr. McCoy’s life.

Star Trek: Beyond (2016) movie events take place two and a half years into the five year mission that the Enterprise is on, making it the year 2262. Again, way too early for Demora Sulu to be born, alleged “alternate timeline” be damned. Again, it has no bearing whatsoever on Sulu’s sexuality.
Consistency and logic is at the crux of Star Trek as well as good storytelling with characters we can identify with – but there are some failings in the TV series and movies before Abram’s version that are suspect. If we want to allow equality and inclusion, don’t go messing with a well-established character’s personality. Create another character in addition as George Takei asked of the writers and producers. But his urging fell on deaf ears.

Not to say that LGBTQ has not been represented in the Trek-verse. It has. Deep Space Nine, The Next Generation (only in very minor degrees), Enterprise… what Pegg and Jung are doing is a tragedy by not creating an entirely new character that would be an invaluable member of the new crew, creating an expanded universe to include more – this is a progressive show, right? And it shouldn’t matter 300 years in the future. But it matters here. Today.

Personally, as a fan of all things Trek, I am disappointed where the new batch of movies is heading and am not especially thrilled by the lack of good storytelling of humanity. It’s come to be all flash and no substance, sacrificing story to get visually pleasing shiny crap so we can “ooh and ahh” at the spectacle of it all. And now we’re sacrificing a major character just to be “inclusive?” I feel for George Takei on this.

Yet, Eugene “Rod” Roddenberry, Gene’s son, revealed that his father wanted to deal with same-sex relationships in 1991, several months before he died. Should it matter that sexuality be included as a “non-issue” along with race and gender from the original series? Of course, but we really don’t need to have a prosetylizing moment or fingerpointing saying “that character’s gay!” So why are Pegg, Lin, Jung, Cho, and Quinto doing this? Is the script that weak? I understand they want to honor Gene and George but I believe they’re missing the point of all this. 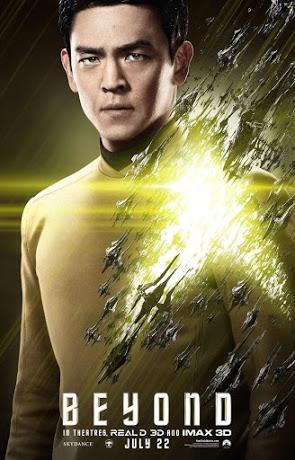 The point is being progressive without having to point it out at all. And not caring. But by altering someone just to fit their convoluted and ultimately futile attempt at a “look at me, look at me” mentality making Hikaru Sulu gay is way beyond silly and foolish. We don’t need a major re-write of a character to include his or her sexuality — it shouldn’t matter 300 years from now but it certainly matters today because “equality,” right? If it’s done right, let’s give someone on the current Enterprise a well-deserved inclusion and leave Sulu alone. That’s all I ask.

Sadly, leaving it alone isn’t in the cards. And Star Trek has become less Trek-y in my view.