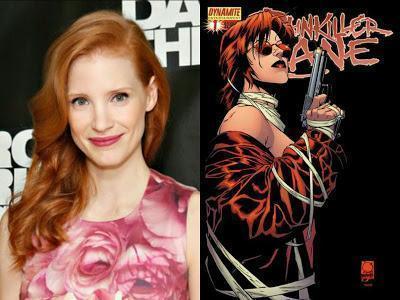 It was two years ago that American Mary, Dead Hooker In A Trunk and Vendetta helmers Jen and Sylvia Soska teased an inspiring vision for an adaptation of the hit graphic novel, Painkiller Jane. Since then, nothing has transpired on that end while it now appears that the project will be moving forward at Solipsist Films, and with news that actress Jessica Chastain is set to star and produce.
The film is inspired by the gritty, edgy and sensational work of Jimmy Palmiotti and Joe Quesada from their 1996 Paperfilms publication with the title character, Jane Vasco, a tough NYC cop who wakes up one day with unique superpowers after being forcibly drugged into a coma following her blown cover during her infiltration of an underground drug and human trafficking ring. Other iterations of the comic followed including Syfy’s poorly-adaptated live-action TV movie in 2005 and series run in 2007.

Painkiller Jane will mark another foray into action Chastain who carried her share of the action sequences in Cedric Nicolas-Troyan’s The Huntsman: Winter’s War, as well as an opportunity to invoke just the kind of female on-screen persona who is unbound and not oversexualized to simply appeal to a certain demographic. From the look and overall tone of the comic itself it seems this one is right up Chastain’s alley, though it isn’t known just yet what kind of film this going to be – an ambitious, R-rated adaptation that gives fans of the comic what it wants, or a PG-13 concoction watered down for a more family-friendly tone. Hopefully the former.

Joining Chastain, producing through her Freckle Films banner are Lotus Entertainment’s own Lenny Beckerman and Solipsist Films’ Stephen L’Heureux (Sin City: A Dame To Kill For). Bill Johnson, Jim Seibel, Ara Keshishian and Palmiotti will executive produce while a director (unless there is more than one?) is being sought after. We shall see!
H/T: Deadline

Watch The Brand New International Trailer For ROGUE ONE: A STAR WARS STORY [UPDATED] The Announcement For Miike Takashi’s BLADE OF THE IMMORTAL Teases Kimura Takuya As A One-Man Army!