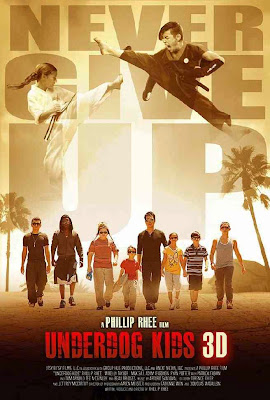 Actor and martial artist Phillip Rhee is finally returning to the screen this summer for the release of his long-awaited martial arts family drama, Underdog Kids. It will be seventeen years since Rhee‘s previous movie career left off with the popular Best Of The Best franchise in the 1990’s, and for many fans it will be a celebration to see him back in his cinematic element with a young and vibrant cast amomg several of whom are talented martial artists, a crew accompanied by brother, Master Simon Rhee, and James Lew and Marc Canonizado designing the action, and a handful of legendary faces to appear as well, no less.

For these and all other matters of releavance, we now have a proper trailer going viral since the film’s acquisition by Anchor Bay and STARZ Media last month. The film may also be getting a limited theatrical release by then as well, so check your local listings and let’s hope this one delivers the 3D action and thrills it promises. Otherwise, read the official information below for a cast, dates and detailed synopsis, and then check out the trailer!

When the struggling Mid-City Community Center’s karate team loses their instructor a week before the big tournament, former MMA champ Jimmy “The Lightning Bolt” (Rhee) returns to his old neighborhood and reluctantly agrees to train the misfit bunch. Despite the struggles they face, the washed-up fighter and group of urban underdogs bravely take on the undefeated Beverly Hills Junior National Karate Team in the ultimate karate showdown at Nationals, and learn confidence, courage and honor along the way.