Place Your Bets In The Teaser And Trailer For Indonesian Crime Drama, PERTARUHAN 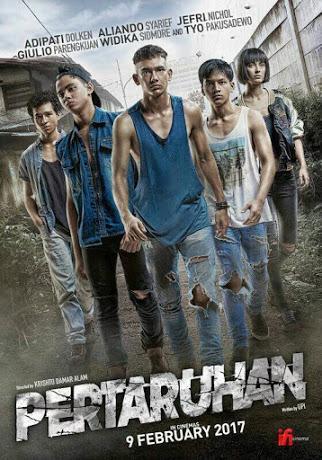 Director Krishto Damar Alam will have his day in local cinemas soon pending the release of his newest film, Pertarhuan. Biggest here among the cast may be actor Tio Pakusodewo, widely credited for his performance as the stoic outgoing crimeboss in Gareth Evans’s The Raid 2, whereas here he takes on the role of a father whose ailing condition forces his sons into desperate gamble to save his life.
Earlier posts suggest the film was due last November although the latest promotional bits now suggest a Feburary 9 release for moviegoers to make note of until then. Adipati Dolken, Aliando Syarief and Jefri Nichol also star and can be seen in both the teaser released several months ago, and the most recent trailer just beneath revealing some compelling family drama with a pretty ample deal of action and brutality to top it off.
Check it all out below!

Watch The Trailer For Cynthia Rothrock MA Cinema Doc, FISTS OF FURY CHANNEL BLAST: Ampisound Scrapbook Breaks Down One Of The Most Deceptive Parkour Videos Ever Seen Online