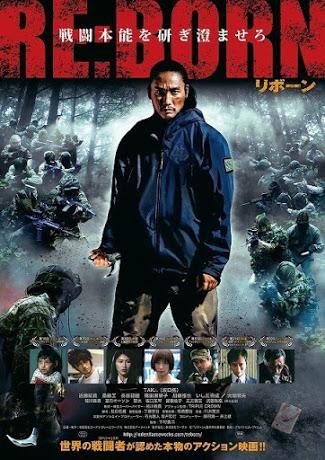 Having had a stellar festival run throughout Asia, Europe and the U.S. with last year’s Fantastic Fest premiere, director Shimomura Yuji’s new film, Re:Born, has seen quite the journey to its praise. The same can amply be applied to the resurgence of its star, actor Sakaguchi Tak who, given personal career circumstances, essentially had to keep off radar and thankfully, that dry patch is now over and done.

How so? Well, despite intial speculations of Re:Born being his last film, it has instead been noticeably buzzed as his return and one that stands deservedly on ceremony. Together with WAVE innovator, close quarters fighting expert Inagawa Yoshitaka and host to a story sampling from the inspired dark, reclusive tales of real-life commandos, Sakaguchi stars as a small town clerk forced to adhere to his bloodlust once again following a string of military murders and the emergence of a squad of clandestined soldiers and assassins led by his former commanding officer now seeking vengeance for his betrayal.

Shimomura, a long time friend and film cohort to Sakaguchi, reunites with his actor since their Versus, Alive and Death Trance heyday. They are joined by a cast that includes young actress Kondo Yura, actresses Shinoda Mariko and Hasebe Hitomi, and actors Ishida Issei, Saitoh Takumi, Kato Masaya and Otsuka Akio.

Re:Born opens in Japan this August with a U.S. release being shepherded from XYZ Films thereafter. The newest trailer is available below.

Decorated Finnish Period Drama, THE FENCER, Fights For More Than Sport In The Latest Trailer GINTAMA: THE MITSUBA ARC: A Tale Of Brotherly Love, Rivalry And Loyalty In The First Trailer For The Web Drama Spin-Off