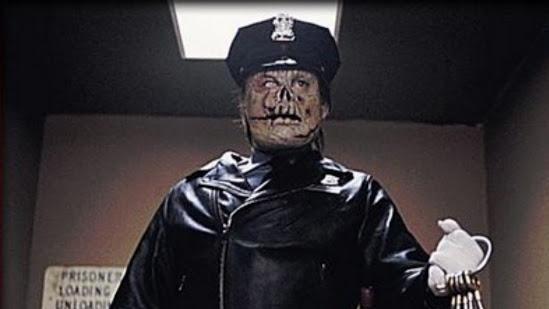 Horror fans lit the internet up late last year when it was revealed that filmmaker John Hyams was set up to helm the Maniac Cop revival with Drive and Only God Forgives helmer producing. Nowadays, you’ll find Refn at Cannes promoting his latest horror flick, The Neon Demon, while you can now expect a slate of titles to come from Refn’s latest shared partnetship via his Space Rocket Nation banner with Vendian Entertainment and Wild Bunch.
As per Deadline‘s latest report on the matter, the first one out will be the forthcoming remake of William Lustig’s original 1988 horror flick. This time, Ed Brubaker’s script will forsee the story of a female Los Angeles cop bent on uncovering the truth to stop a madman in police uniform from spilling innocent blood. The film is expected to be the first of a trilogy and will roll cameras this summer with Lustig producing along with Refn and long time partner Lene Borglum.
Actor Robert Z’Dar initially played the character in Lustig’s original film, propelling the franchise into cult status prior to subsequent efforts to revive the film that never came through. Z’Dar passed away back in March of last year at the age of 64.
Refn’s latest film, The Neon Demon, opens in limited theaters in the U.S. on June 24.