Review: BLINDSIDED: THE GAME Plays Fair And Firm To An Industry That Needs To Open Its Eyes Already

Making shortfilms as prologues to subsequent longer-form projects is nothing new in film and television. It is equally delightful and surprising when it goes unannounced and, as expected, delivers tenfold on its intentions with the engaging audience.
It wasn’t exactly foreseen last Spring when actor, martial artist, stuntman and filmmaker Eric Jacobus started garnering festival praise with twelve-minute narrative short, Blindsided. At twelve minutes, it achieves nearly everything you might expect or enjoy in a shortfilm or proof of concept right down to the ending without necessarily feeling baited to wait for more. Instead, it garners your furthered interest in the character and universe, and that is simply that.
Going forward however, whatever said interest that entailed clearly took hold of the people at JB Productions, Jacobus’ shared independent film banner with industry stunt coordinator and Blindsided director Clayton Barber. Just over a year later and with the concerted efforts of fellow actor and stunt professional, producer David No at Furious Films, the project has taken on new life with a slightly bigger cast and a modestly sizeable scope with the actor and stunt multihyphenate extending his screen presence in Blindsided: The Game, much to the delight of martial arts fans around.
Jacobus’ own interactivity with the development and preparation for his role as the fast and nimble Walter, a blind apple pie expert with a knack for sensing danger at almost all times, is certainly something to make note of in his appeal to viewers. It also speaks to his immersive knack for experimentation and boldness, using his on screen persona to hone in on a number of gag bits and slapstick, from spittaking over a freshly made pie to inextricable action scenery with comic gems woven into some of the fight beats.
Rest assured, most of the film gives us a version of this character with senses sharpened to a near-T. It helps build on the intensity needed for the action to work, heightening the threat levels as our blind protagonist fights his way through bullets, blades and obscurity.
The story itself is another factor, and from start to finish, what we first learn about Walter in the inaugural twelve minutes collectively encompasses our understanding of him throughout the remaining half hour. Walter is an enigma for the entirety of the tale and so you’re left getting what you see, some of which, in turn, hints at a deeper layer to his character that goes unexplored.
The brunt of the story lies with Walter’s friendship with Gordon, played by actor, martial artist and relatively known industry stunt professional, Roger Yuan. Gordon and Walter share a warm, neighborly civility and friendship that enhances the story, allowing the first twelve minutes to pave further into the tale of their levity. It more than allows viewers to witness how Gordon copes with Walter’s elliptical past.
As the story presses on, Gordon’s past is brought into light with respect to the villains we meet during the film. This enriches the action that entails with Gordon eventually having to throwdown alongside Walter, thus amplifying the spectacle of watching top-tier screenfighters in their element opposite their villainous counterparts, including the aforementioned No along with players Nicholas Verdi, Brett Sheerin, Khalid Ghajji, Justin Hall and venerable bladed-weapon scholar, career stuntman and fight choreographer Luke LaFontaine.
The film’s set pieces also lend fair and intriguing insight to Walter’s own tale. His interest in apples is characteristic of the shallow view, while at one point he opens a small box containing several items that albeit mildly invoke the presence of a history worth expanding on for Walter’s hopeful proliferation in future stories. 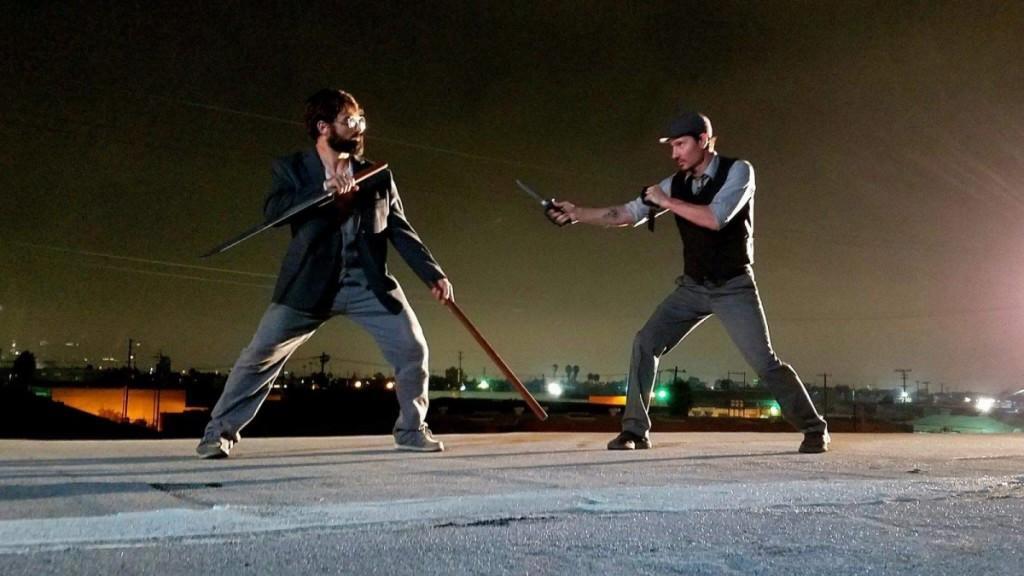 Save for any other cons there may be of character development in a shortfilm, Blindsided: The Game foremost prioritizes building on Walter’s concurrent profusion and the moral compass that foundates his decision making, what he sees in people and learns from situations with instincts tethered to his four remaining senses. Genre fans who might be curious on just what kind of hero Daredevil alterego Matt Murdock might be without the perfunctory black crimefighting outfit or the fully-evolved maroon battlesuit will even get a swift kick out of what Jacobus accomplishes on screen.
The action direction echoes exactly what was intended with the premiere twelve minutes introduced last year with Jacobus overseeing. So too, with Yuan weighing in on the choreography along with co-stars LaFontaine (Savage Dog, The Debt Collector) and No (The Matrix Revoluitions, Altered Carbon) who also serves as producer. Their roles are observed within calvary of a group of gangsters led by a crimeboss named Sal, performed with commanding lure by actor Joe Bucaro, and with an air of budding comedy and gag humor shared with most of our antagonists here as well.
The combined efforts of Barber’s story telling here along with that of Jacobus and the fight coordination designated throughout lends visibly as a tribute to classics like Zatoichi and Blind Fury. Taking notes from auteur Beat Takeshi’s playful, quirky aesthetics whilst honing in on the immediately chilling brood of Rutger Hauer holding something sharp in the dark, Jacobus, without fail, harnesses everything he has and puts it all on display with Barber running the show to the tune of a sportive score from Steffan Schmidt and Raymond Lane.
The quality of Jacobus’ work has always remained consistenly on the rise in the last eighteen years or more since the time leading up to the founding of The Stunt People. Blindsided is an evolution of that creative growth and an exemplary bookmark of the kind of vision that this creativity hinges on, which is why fans like myself have championed Jacobus for as long as we have, and it never fails to surprise me that there are still people who have never heard of him at least up until I’ve brought him up in conversations – it happened again on Friday last week as press coverage and reviews were underway for Blindsided: The Game, which speaks heavily to how continually, and almost criminally underrated Jacobus is.
We often argue and point out that creatives like Jacobus have the potential to succeed and grow to more fruitful successes and yet when fans are often left in protest wondering why it is he hasn’t been given a starring role or brought aboard something on a more prime level. Calls to have him star in a movie with the likes of Scott Adkins, Michael Jai White and even Jackie Chan crowd the discussion at times and so it begs asking: What gives? Similarly, and not for nothing, merely saying “we may never know” bodes pretty equivalently to blinding inquisitors by playing dumb to their curiousities.
No matter how good people like Jacobus is or those of his field, the fact of the matter is that the industry still bends to its own wills and rules, and a grade of politics that still bends privy to its inclusions. It otherwise roots what we now see in performers like Adkins and White diversifying themselves just a little more on screen apart from their typecast action star personas despite the logic of bumptious, judgemental observers and crowds at places like Cannes – moreso in the hopes of ascending from B-level to A-list status; the biggest example of this being actress and martial artist Selina Lo whose addition to Joe Carnahan’s new action thriller, Boss Level opposite Frank Grillo and Mel Gibson has certainly become one of the most celebrated industry moves among independent directors and producers still walking the beat for opportunities. 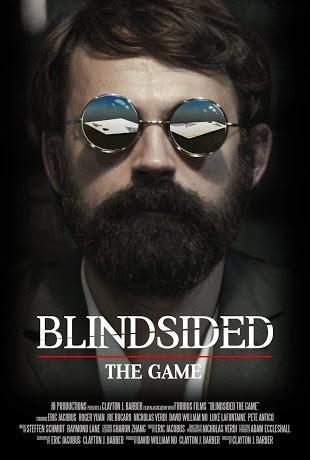 It’s prospects like this that embolden the prevalence of smaller, burgeoning organizations like JB Productions and Furious Films in their endevaors to bring something to the main floor. Barber, a stuntman and actor with up to twenty-five years in film and television and brimming with as much studio-level experience and wisdom one could only hope to accrue, is making the clear and present move to further the proliferation of such raw and organic creativity that now rests in his flourishing partnership and friendship with Jacobus. Barber brings a cohesive style to the story at hand, right down to the pivotal poker game central to the conflict that commences in the third act, and with the gross competence and drive that film fans aspire to see and oblige in a filmmaker.
With gems such as Undercut, Paid Off and Paper Pushers and having risen to the occasion time and again with beloved independent feature thrills like Contour (sans its recut as The Agent), Dogs Of Chinatown, the Action Kickback production of Death Grip and taking the proud, short-lived mantle as Stryker in Mortal Kombat: Leagcy – Season Two for WB Digital, it is ever more clear that the JB Productions banner has earned the pivotal legitimacy that more than matches the praise it has been getting from followers of Jacobus’ work.
Given the ceremony and reception they’ve been receiving in the past five years between hits like Rope-A-Dope, its spectacular sequel with Ken Quitugua (Unlucky Stars), and this year with Blindsided: The Game, shows every bit that they deserve the monumemtal recogition and opportunities that are rarely approved for up-and-comers. For want of the attention of those with influence who, and on terms ranging any where from stubborn to perpetually nescient, continue to look away, it absolutely cannot be said enough. And if I may say so myself, certainly Phillip Noyce might agree.