I’m about as knowledgeable as the next person on who four-time filmmaker Chang is. There’s at least one other title still on my wish list at current with the 2014 Fred Cavayé remake nod, The Target, while his most recent endeavor, Reset, has taken a foothold in China with a release this summer.
The film presents a kinetic sci-fi thriller with a nicely woven story that embraces the sort of usual subliminal and obvious messaging on time travel and the shortspan of human life in the course of everyday tasking and multitasking. Actress Yang Mi draws out the narrative for this as Xia Tian, a single mother who finds herself and her son swept into a death spiral when her company’s recent breakthroughs in particle teleportation are made known to its more nefarious rival company.
Placed with the obligatory purpose of albeit successfully tugging at our heartstrings is young actor Yihan Zhang in the role of Doudou, Xia’s only son whose lean toward his favorite TV show superhero lends itself amply in cheering on his mother as the story goes forward. Actor Wallace Huo stars as Cui Hu, the relentless henchman hired to obtain the newfound data. Actor Shijie Jin plays the director of research at the facility where Xia Tian works.
A few flaws notwithstanding, there is a lot works in this Jackie Chan-produced thriller that makes Reset so watchable. Yang Mi offers a physically less-than-able heroine who undergoes a trilogy of changes that allow her to become stronger as the story progresses. In the course of overall development, we meet three of her pesonas, including her darkest one, and all of whom help carry the film’s second act from start to finish.
Chang encourages empathy in all of his characters here, especially the evil ones. Huo’s performance as the inexorable insurgent gives us a villain truly worth despising, which makes pitying him almost discomforting even though it’s a necessary add-on to the formula. 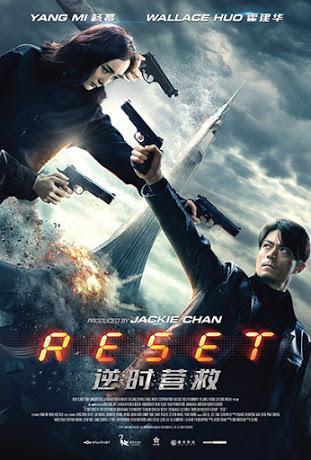 The B-story is where Reset layers things a bit with a less-intricate arc that involving corporate espionage and brazen acts of terrorism. There’s not much offered here with exception to the opening intro and its contents along with some of the film’s smaller bit roles and that of actor Shijie’s character as the events unfold and all the cards are eventually laid on the table. It’s essentially an anchor to help set the tone for the rest of the film.
Reset nearly loses ground once the time-traveling starts at around 45-minutes in, but only if you try to think too far ahead of the film’s pace. The film is a cerebral, fast moving thriller at times and will have you pondering the next turn of events – a notable credit to the film’s structure and writing, but something to be aware of lest you lose track.
The action scenes are comprised of gun battles and car chases at least one or two major crash scenes that dare to challenge physics to the point of Fast And Furious levels (how any one person survives a five-person carpool cliff fall is beyond me). Of course, depending on who you are, all of this is forgiveable once you’re already pulled in by the story as Xia Tian’s fight for survival spans the course of three parallel dimensions.
Reset has a lot that could have been explored and could likely be the subject of debate for its process of conception. For what it’s worth, however, you still get a story that tells the tale that needed be without its excesses, and you get a variety of characters that appeal to your interest for the direction it takes.
Chang brings plenty to Reset that emotively appeals to viewers, as well as thrills. Yang Mi who stars in Guo Jingming’s Tiny Times film series, does incredible work with a solid cast and a script that challenges without venturing into the ridiculous and mediocre. The opposite can be for some of the VFX shots as those will be hard to avoid while others stand impressive and adequate.
If you’re into blazing gun battles, high speed chases and close calls, Reset brings a wealthy balance of three to the screen and much more. Just stay the course and don’t try to outrun the story faster than our actress. You’ll enjoy it much more.