SAVAGE DOG Shows Its Teeth In The Explosive First Trailer 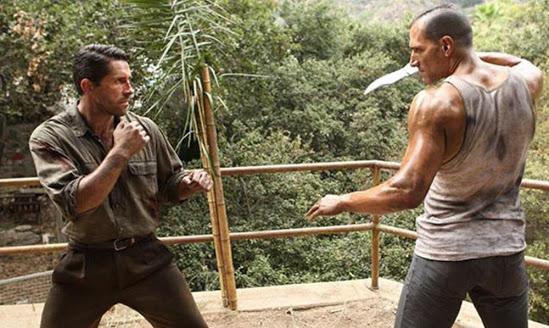 When it was announced last year in a series of reports that martial arts stars Scott Adkins and Marko Zaror would be returning to the screen, Savage Dog had no more than names and a logline attached to some tentative artwork. It’s something of a mystery to me as to why that was but thankfully the film has earned its way to completion and now we have an official trailer of sorts to start things off with.
SYNOPSIS:

Indochina – 1959. A lawless land controlled by the criminal class: Vietnamese warlords and European war-criminals. Den-Dhin-Chan Labor Camp is run by four such dangerous men. The worst prison in the land, it is here that an Irish, former-champion boxer Martin Tilman (Adkins) has made a name for himself fighting tournaments, on which wealthy criminals gamble in high stakes events. When Tilman is due for release, he just wants to return home, but the corrupt forces running the jail will do everything in their power to keep him locked down. When all that Tilman holds dear is taken away in a vicious act of violence, he is forced to confront the men responsible and take his revenge.

Prime action director Jesse Johnson sits at the helm and re-teamed with stunt coordinator Luke LaFontaine since their completion on the upcoming noir action crime thriller, The Beautiful Ones. Also starring are fellow martial arts exponents Cung Le and JuJu Chan, and actor Keith David among others with XLrator Media bearing the U.S. rights apart from other territories pending.
Savage Dog is one of a few titles on their way this year with Adkins in the spotlight so keep an eye out for more info. In the meantime, check out the trailer below!

Vin Diesel And The Curious Case Of The Action Star EGOT Shortfilm Review: BULLOCK THE BRUISER (2017) Brings The Pain!