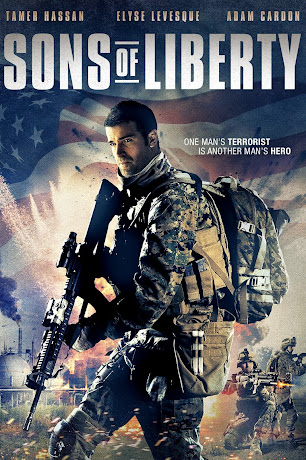 Special Agent Tom Hardy must assemble an elite team of scientists and soldiers to prevent the construction of a weapon so deadly a quarter of the US would have to be abandoned for decades. As the team members of the top secret unit, know as the SOL, struggle to find the balance between duty and their personal lives, an outside threat emerges. A serial killer is torturing women, leaving their bodies a mangled mess of scars and symbols. Special Agents Tom Hardy and Dr. Jan Baker are drawn into the game of cat and mouse as the remaining scientists and soldiers race to develop a solution to locate incoming stolen nuclear materials without alerting their enemies. Little do they know that their opposition is comprised of a deadly cadre of mercenaries, an arms dealer, a rouge IRA soldier, an assassin, and a mastermind whose motivations blur the line between terrorist and revolutionary.

REVIEW:
Writer, producer and director Drew Hall‘s 2013 action thriller, Sons Of Liberty has some bit of flare to it. However, I honestly found myself waiting for it to end sooner with every passing minute, and as much as I am akin to writing positive reviews about movies, sadly this won’t be the case.
The movie starts off with an animated sequence of highlights pertaining to the evolution of a revolutionary cult called the Ordo Mundi. From there we are introduced to actor Adam Cardon who plays Tom Hardy, special agent and leader of a unique unit dedicated to investigating all matters of terrorism with the aid of science and special tactics. Following a previous misson gone awry, he reacquaints with the beautiful Dr. Jan Baker played by Catalina Soto-Aguilar Kind. She happens to be the object of his unrequited love, but mainly focuses on what she can provide to his team.
The film moves on with a story that that tries to tow the line between miltary action thriller and murder mystery, introducing actor Tamer Hassan and actress Elyse Levesque as two formidable leaders of a terrorist pocket of the Ordo Mundi trying to acquire a huge chunk of explosives from arms dealer, Nathan, played by actor Keith David in the four minutes of screentime he gets, which is too little (the same could be said for Hassan). Overseeing their activities an incognito assassin (played by actor Philip Fornah) who was sent in by the leader of the cult to make sure things go “according to plan”.
Other members of the team are portrayed by Casey Myers and Christine Kozlowski who play happy couple Keith and Maryanne, with actor Jaylen Moore and actress Susan LeCourt-Barbe rounding off most of those listed. We also meet actor Mark Sheppard in the role of Ackley who often comes to blows with Tom about who is in charge.
Look, I could go on and on about the remainder of the details here, but I won’t, lest I spoil further about what happens next. I tried watching this movie twice, and I was frustrated and bored both times; I actually fell asleep halfway through and dropped my phone the second time.
Sons Of Liberty suffers from a poorly-written script, too many characters, bad editing and (even worse) acting, and a story formula that tries to go into too many directions at once. Some moments were a little more enjoyeable than others – moments of laughter and poignance aside from the three or four gun battles that take place throughout the film; I also enjoyed the little bit of GoPro fisticuffs between Bruland and Levesque in the third act, but even though I don’t necessarily know what the circumstances were for this production, I do know that more could have been done actionwise.
The script also suffers tremdously from the annoying attempts at getting down all the military and bro-science lingo to help keep the film going, which is unfortunate because even after watching it twice, I still don’t know what the hell just happened. This literally kills this film’s few attempts to try and keep these characters relatable to the audience. I was left unengaged and numb for most of the movie and I couldn’t feel much of anything, even after all the bullets flew and bodies fell when the film goes into a musical montage chock-loaded with slow-mo stares, lens flares, crying and such.
The script also suffered from some discontinuity and at least a few moments that I really thought were just stupid. There’s at least one good guy who dies in the third act, but it’s a really stupid death and it tries so hard to be a sad, human moment that looks like melodramatic cheese.
Before I wrap it up here, I’ll give Sons Of Liberty this though: First, I rarely see female stunt coordinators in the field and I commend Jasi Cotton Lanier for her efforts in both designing the action, as well as contributing her small role in this film. Genuine talent like that needs to be nurtured. And second, Sons Of Liberty would have better served as a concept for a wider-ranging TV series for all the angles it tries to engage. Shows like Strike Back and older television hits like Soldier Of Fortune/Special Ops Force and the ill-fated UPN action series, Freedom, were, and still are my cup of tea. But for a feature-length film, this just wasn’t meant to be, and I know there are a few other approving reviews that look at this film a lot better than I have.
In the end though, all I can really do is be honest, and honestly, this film sucks. It sucks, and I hope this helps its director make better movies in the not-too-distant future.
Sons Of Liberty is now available wherever movies are sold. I can’t recommend this one, folks. But you can give it a shot.

Watch The Final Trailer For KUNG FU JUNGLE! A New Soldier Enters The Battlefield In The New Trailer For HALO: NIGHTFALL