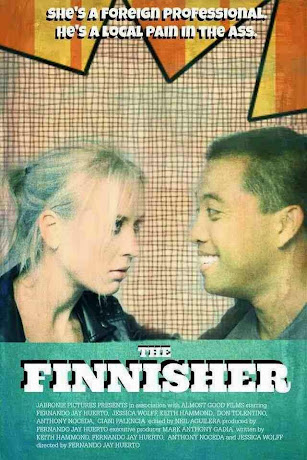 Fans of online action cinema well-knowing of the comedic misadventures that take place in the body of work from award-winning independent filmmaker and actor Fernando Jay Huerto will be pleased to stick around in the coming years. He’s got some things brewing with a few friends from overseas, including Finnish singer, actress and Wushu purveyor Jessica Wolff who can now be seen in the latest 48-Hour Film Festival project from Jabronie Pictures titled, The Finnisher.

The story takes off with Wolff in the role of Joyce, a Finnish I.A. investigator who coerces an unsuspecting fellow named Tim to help her allocate the sensitive info she has against the will of a corporate goon squad hot on her tail. The project was completed within two-days on the week of June 28, with Jabronie Pictures, representing the project for its festival premiere in San Diego in mid-July, ultimately winning best fight choreography and earning three nominations for Huerto and Wolff, including Best Director, Best Actor and Best Actress.
The two already have quite a handful of projects coming down the pipe from their earlier collaborations this year, and with any luck, they will eventually be able to help revamp one of Huerto‘s most memorable early Jabronie works, the Gunpoint trilogy, with Wolff in a role specifically designed to tie into another of Huerto‘s exciting, action-packed universes, Heart Shot Grand Prix.
As previously stated, things are happening, slowly as always with the state of independent film, of course. But, they do happen, and as good as the results appear to be from this latest get-together among Wolff and the inspired professionals over at Jabronie Pictures, I certainly hope things happen VERY soon.
Hopefully you have been keeping up with Jabronie Pictures over at their official Facebook page, at least. However, if you’re just now learning about them, then I suppose now is as good a time as any to catch on. So, without further ado, feel free to watch The Finnisher in the embed below where you may also subscribe their channel, and even browse for a bit.
Also, while you’re at it, CLICK HERE to visit the official website for Jessica Wolff…but only because a lot of cool stuff happens there too!