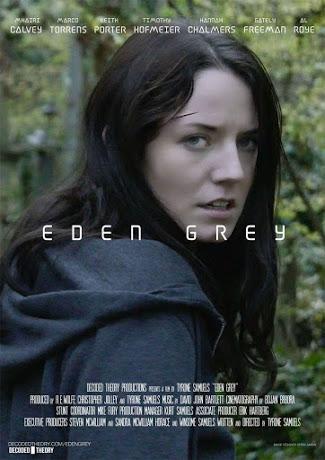 To date, it still surprises knowing actress Mhairi Calvey was once the young rising star seen more than twenty years ago in Mel Gibson epic, Braveheart. I actually need to go back and have another watch at some point but it’s a worthy blurb to throw in going into this Spring film festival season seven years since relaunching herself into film.
Her latest endeavor now readies a premiere at the Artemis Women In Action Film Festival with Eden Grey, a fast-moving survival tale that encompasses a little bit of sci-fi in its grounded visage of thrilling suspense and Bourne-style action. Director Tyrone Samuels’s script sets things in motion featuring Calvey in the title role a solider on the run and in search of answers to uncover the truth behind a controversial covert supersoldier healing program that has rendered her expendable.
Right off the bat, Calvey’s dramatic strength and caliber lends instant resonance. The story’s pacing is the real test, however, as the film starts with a brief, introductory dialogue not long before diving right into the action and then going into a brisk footchase throughout the streets of London. That all happens in the first five minutes before the second key fight scene bookends the story development into its recapitulation, met with a cliffhanger ending that intensifies the intrigue some.
There are definitely a few editing and photography moments in the fight scenes, as well as some choice techniques that might falter with some lesser forgiving eyes. It doesn’t undercut the action too much in that regard while our star nonetheless continues to invoke gumption and comprehension in performing physically demanding scenes.
There’s no doubt that a project like Eden Grey will be a welcome feat at Artemis. Granted, there’s always room for improvement in a project like this one, but where there is room for improvement, there is also room for potential, and delightfully, Calvey is no exception.
Eden Grey also stars Marco Torrens, Keith Porter, Timothy Hofmeier, Gately Freeman, Hannah Chalmers and Al Roye.