THE FORGE: More Than A Film. It's A Message. 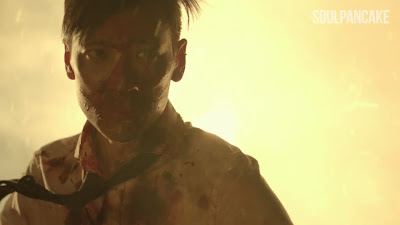 It is with a bittersweet sense of joy and fulfillment that I finally got in touch with independent filmmaker Stephen Reedy, who I, among many, have been a fan of ever since the release of the hit film, Contour (a.k.a. The Agent). It was through a post today shared by another indie action filmmaker, of the shortfilm you are about to see in the embed below titled, The Forge, an interpretive, artful and visually stunning fantasy action piece starring Eric Lim (pictured above) as a man trapped in a fiery hell battling his demons.

But more than a mere action gem, THE FORGE is a spirited, narrative story about courage it takes to deal with tragedy, and to forge one’s self from devastating pain and sorrow to become something greater and stronger against the odds.
The film was funded by previously saved money left behind by Eric’s late sister, Tanya, who sadly committed suicide in June 2011. In addressing the post-production process, Stephen, who directed the short film, says making THE FORGE was somewhat of a healing process for Eric, who shared his thoughts on Facebook today on the short film’s release, saying in part:

“…For me, it’s not even a short film or work of art. It’s been an entire chapter of my life. The entire creative journey and lifelong friends and collaborators made along the way are thanks to you, Tanya.

No matter what happens to you today, there’s always a tomorrow worth living for. Trust me. ♥”

Click below to watch the film. And then check out the heart felt behind the scenes footage where Stephen explains the cinematic and spiritual process of great minds coming together to spur growth and creativity from something destructive.
On that note, it is here that I extend my own personal best wishes and condolences to Eric and his family.
Without further ado, enjoy THE FORGE. For more info, visit www.ForAnybodyHurting.com. Click HERE to obtain your own free copy of the soundtrack from the film.
Rest in peace Tanya.