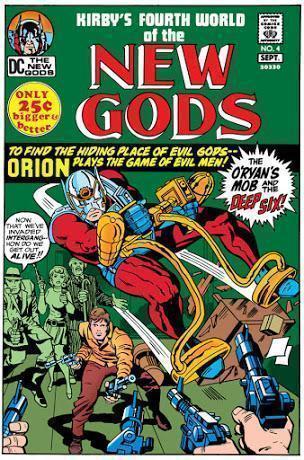 Dominic Patten and Mike Fleming Jr. are reporting from Deadline as of Thursday that Ava DuVernay is onto directing yet another big scale event film following her milestone effort with A Wrinkle In Time. Thus, following Selma helmer’s own interest in superheroes via Twitter last year, comic book adaptation, The New Gods, will be the project forthcoming from the pages of DC under Warner Bros. Pictures, as inspired by Jack Kirby’s 1971 creation of the same name.
The New Gods was the Genesis of the uber-villain Darkseid. Also called “Fourth World,” the Kirby creation debuted in a trilogy of related comics written and drawn by Kirby that were published in the very early 1970s: New Gods, Forever People and Mister Miracle. The New Gods came into existence after the world of the gods of classic mythology were destroyed during Ragnarok. The deities inhabit two planets: one is New Genesis, a lush paradise, and the other Apokolips, which sounds like Dante’s version of hell. War ensues.
The studio is reportedly moving fast with a screenwriter for the film which now marks as DuVernay’s second movie budgeted over $100 since becoming the first African American female director to helm such a big scale project in A Wrinkle In Time, adapting Madeleine L’Engle’s 1962 novel for Walt Disney Pictures.
The production, which also stands next to Patty Jenkins’s success seen in last year’s Wonder Woman with a sequel in tow, marks the latest move for the studio in its new approach to DC films since Warner Bros. Pictures Group president Toby Emmerich installed New Line Production EVP Walter Hamada to run point on future adaptations back in January.