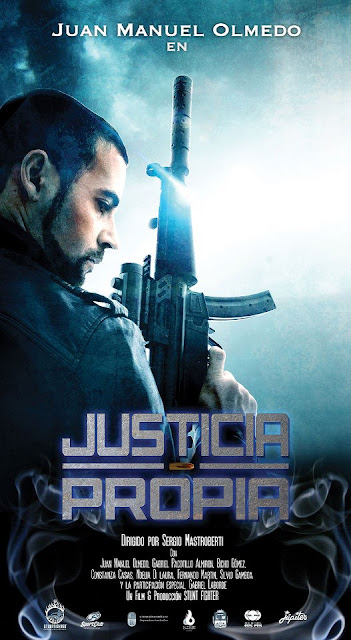 The guys over at Stunt Fighter Producciones have been quite busy within the past year working on a goregously explosive martial arts action crime thriller straight from the streets of Buenos Aires, Argentina called JUSTICIA PROPIA from director Sergio Mastroberti.

With post production still on-going, in addition to a few more trailers on the way prior to the film’s release, a new teaser is online. And it is chock-full-o-action, pure grit, adrenaline-induced fight sequences, and explosions…. explosions everywhere!.

Actor Juan Manuel Olmedo who stars as the lead, also served as producer, stunt coordinator and fight choreographer for the film. I will have a lot more work in between now and the next few months as the year progresses, but I will be looking forward to talking to Juan in the hopeful near future to discuss the film, his career and the future of Stunt Fighter Producciones.

In the meantime, check out the premise below, and the first footage from the film!

Diego Ponce (Juan Manuel Olmedo) is an experimented special force agent, who was always in charge of the most dangerous and difficult missions, such as hostage situations, counterterrorism, infiltration, etc.

Diego, wrapped in fury, begins a relentless hunt. In his search, he begins to uncover a vast network of corruption and drug trafficking, where no one is clean.

“Own Righteousness” is an action thriller, suspense and martial arts film, with constant adrenaline and breakneck pace. Directed by Sergio Mastroberti and starring Juan Manuel Olmedo, it was shooted on locations in San Martin and Caseros (Buenos Aires province).

Olmedo and Mastroberti are seeking to give birth to the genre action / martial arts with national seal. To achieve this, they joined STUNT FIGHTERS trained by the protagonist of the film and also they joined to several of the best martial artists in the country.There are two ways to do action movies.

“Own Righteousness”, will show you his own…