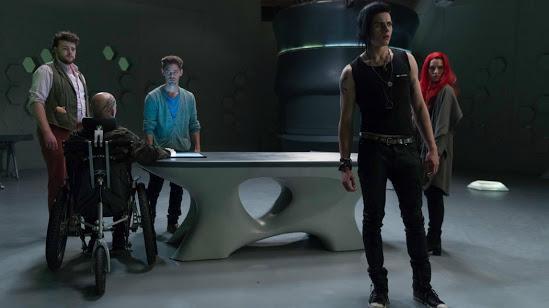 Gallowwalkers helmer Andrew Goth’s latest turns out to be a bit of a bigger deal than expected. The new film which headlines Sam Neill among its youthful cast was initially titled DxM as per its narrative about a brilliant group of students who discover the dark side of their latest scientific awakening.
The film saw a trailer early last year while press on the film tapered off before long and remained off the radar until now. Apparently the folks at Terra Mater Film Group and Red Bull have big plans for the film between now and March, involving an interactive global online and real-world gaming experience functioning in tandem with the film’s dynamic puzzle challenges.
You can read all about it at ComingSoon.net but needless to say, how this film, newly titled MindGamers, gets rolled out will be an interesting feat to witness, and one with world class freerunning extraodinare Ryan Doyle leading the charge no less.
SYNOPSIS:

A group of brilliant young students discover the greatest scientific breakthrough of all time: a wireless neural network, connected via a quantum computer, capable of linking the minds of each and every one of us. They realise that quantum theory can be used to transfer motor-skills from one brain to another, a first shareware for human motor-skills. They freely spread this technology, believing it to be a first step towards a new equality and intellectual freedom. But they soon discover that they themselves are part of a much greater and more sinister experiment as dark forces emerge that threaten to subvert this technology into a means of mass-control.

MindGamers takes the mind-bender thriller to the next level with an immersive narrative and breath-taking action.

The latest trailer officially live for all to see, which, I have to say, eases my own mind some after three years. Check it out below while I finish exhailing.